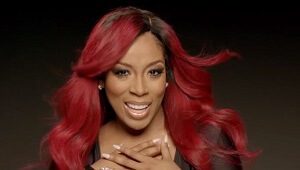 Those are the exact words VH1 reality star and singer K. Michelle used on the subject of plastic surgery. In a Huffington Post interview, the VH1 star had no problem—rather touting loudly—admitting to having “alterations” and being “under construction.” As a matter of fact, the reasons for her plastic surgery are valid as far as she is concerned and that going under the knife helped her accept her body.

In a video report that complements the news article, MadameNoire editor asks K. Michelle what made her decide to undergo three procedures and if there was any pressure from the industry to “maintain that sort of figure.”

As for figure, K. Michelle has a full and sexy shape, one that speaks for itself; large breasts, full buttocks and a flat stomach. Having breast augmentation, fat transferred to her buttocks and liposuction on her stomach is nothing to be “ashamed of,” according to the star. On the contrary, having multiple procedures is strictly an individual choice.

“You don’t have to do anything to be popular, you need to do what makes you happy,” said K. Michelle.

What separates the singer and actress from other celebrities is her willingness to have her plastic surgery filmed for her reality show My Life. When asked why she had it filmed, K. Michelle boldly answered, “Because it is my life, and I am not ashamed of wanting to suck the rolls out of my stomach.”

With her new album “You Wanna Buy a Heart” and her upcoming January 15 Essence magazine cover and interview titled “Don’t Judge Me,” the 30-year-old said she recalls being a child who was awestruck over celebrities’ seemingly all-natural beauty.

“I remember being a little girl and looking at stars and thinking they were perfect,” K. Michelle said in the video.

K. Michelle commented that My Life, following her prior shared spot on the VH1 reality hit Love and Hip Hop: Atlanta, is actually mostly about her life as a mother and recording artist.

“I am excited because it is all about me,” said K. Michelle. “You get to see a whole different side of me.”

Noting the last thing she wants to do is deceive fans, the star explained, “I don’t want little girls to feel like I really did wake up like this, okay? I’m not like that.”

Wanting her fans to see that she works hard and “it is not only roses,” in reference to her stardom, she talked about how much she has to give of herself. But don’t get her wrong, between interviews, filming, recording and more, K. Michelle could not be more grateful to labor for what she loves. “I feel like I have gotten a second chance at what I love to do, and I promised God that if I got a second chance I would work my butt off,” she said.