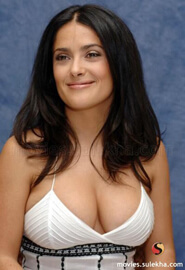 Breast enlargement surgery enhances one’s shape, creating a more attractive, better proportioned figure. In addition to the benefits breast augmentation has to one’s physical appearance, it also increases confidence and self-esteem. Celebrities have breast enlargement surgeries for a number of reasons; some to signify a new beginning in their life, others to maintain the body they were known for when they were younger. Here are a list of the top twenty rumored celebrity breast implants that exude a classy, tasteful look and have proven beneficial to the performer’s career.

1. Salma Hayek
Actress Salma Hayek is known for her tremendously voluptuous shape, and in the last couple years it has become even more voluptuous. While many people attribute her extra curvaceousness to her recent weight gain, it's nearly impossible to go from a large C cup, to very large DD's in such a short period of time without augmentation.

2. Christina Applegate
Christina Applegate learned that she had a tumor in one of her breasts and a mastectomy was recommended. Applegate then opted for a double mastectomy augmentation surgery, during which she received new breast implants. The procedure provided tremendous medical benefits while leaving her looking as gorgeous as ever!

3. Beyonce Knowles
Beyonce is said to have had breast augmentation through the axilla (armipit), which on people with darker complexions usually prevents the development of keloid scarring. Beyonce's breast implants have really balanced out her "bootylicious" figure, making her appear more curvy with the classic hourglass shape!

4. Hilary Swank
Hilary Swank went from looking quite flat in the early stages of her career to being very busty after the release of her breakout film "Boys Don't Cry." Whether it is simply because she was concealing her naturally large breasts or if the rumors are true; it’s hard to believe that an actress who was once so associated with having a boyish figure was concealing her breasts and that her sudden growth spurt is not to be attributed to breast implants. Swank is said to have had the breast augmentation after her divorce from Chad Lowe, signifying a new beginning in her life.

5. Nicole Richie
Nicole Richie is proud of her surgery, having gone from an ultra-flat chested size zero to a very tasteful large B cup. The breast implants have done wonders for her figure and have given her once overly nubile look a very elegant shape.

6. Mila Kunis
Mila Kunis began her career on That 70's Show and has never been very busty. Starring in the hit movie Forgetting Sarah Marshall," Kunis showcased more than just her acting talents! Though her breast augmentation is not confirmed, it appears as though Mila Kunis opted for a moderate upgrade. Implants of this type are typically placed underneath the muscles, making the breasts appear very natural and not distracting from the actress’ already great figure.

7. Katherine Heigl
Katherine Heigl is speculated to have had breast augmentation, though older photos indicate she has always been rather well endowed in that department. If her large breasts are the work of a surgeon, they were done very tastefully and suit Heigl’s image very well.

8. Denise Richards
Denise Richards has had three breast augmentations. Richards had the first of her surgeries when she was only 19 years old. Her second surgery was done in the midst of her young acting career and the surgeon made the assumption that because she was an actress, she would benefit from a move up to a D cup, which was actually much too large for her frame. Finally, Denise Richards did her research and opted for a surgeon and breast size that worked well for her. Her current implants suit her body well and seem to be the perfect shape and size.

9. Demi Moore
Demi Moore has been gorgeous from the start, but after the 1996 release of the movie "Striptease" there was a great deal of speculation that she had a breast enlargement surgery. In keeping up with her boyfriend Ashton Kutcher, she has maintained her body and has since opted for a more modern bust, slightly reducing the size of her implants and later having a breast lift.