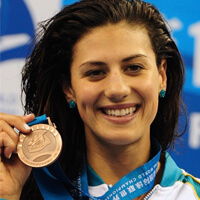 Stephanie Louise Rice has it going on. She is a champion swimmer. She has won three gold medals at the Olympics in Bejing and was awarded the 2009 Medal of the Order of Australia on 26 January 2009. She knows what’s up. She also knows her nose; Stephanie Rice has recently announced she received a nose job.

This was no flippant decision. In a recent exclusive with Who Magazine, Stephanie Rice has not only revealed her new nose but admits she wanted to have it fixed for an entire decade. Rice, 25-years-old, said that her sense of self-esteem was in shambles after a particularly unfortunate accident in a swimming pool when she was just a teenager. The resulting injury flattened the bridge of her nose and consequently became a source of ongoing sinusitis problems.

Rice has been extremely candid about her sensitivity. “My family and friends would say it was fine, but random people would comment,” she tells all in the new issue of Who Magazine. However, given her status as a champion swimmer and ongoing training, getting a simple nose fix was not so simple after all. Rice has wait 10 years before she could set things (and noses) right.

Rice has reportedly had two rhinoplasty procedures. The first was in Brisbane in 2012 after the Olympics in London to fix the break at the top of her nose and the second was in Sydney this past January. According to Rice, the operations were never a matter of vanity.

“Seeing the better version of my nose made me realize how much it had been affecting me,” she told Who. “Everyone will have an opinion, and what I’ve learnt over the years is that you can’t do things to please people. I love the result.” While Rice has not ruled out the possibility of future procedures or surgeries, she says the decision will be ultimately her own and carefully thought out.

In fact, while the first surgery on her nose was completely medical in nature. Rice has claimed she still suffered from sinusitis problems, reduced airflow and a deviated septum. The second surgery corrected those problems and a few cosmetic ones as well. Says Rice, “I love the way my nose looks now and I can finally breathe. . . I don't have a problem fixing something that was broken in the first place.”

Neverthless, the Olympian has received some criticism from the online community for “abandoning” her original looks. Some online rumors have claimed Rice has even gone under the knife for breast implants and received Botox injection. Rice claims she remains “authentic” looking and has not opted for Botox or breast augmentation. Rice says it is impossible to please everyone and yet, simultaneously, the pressure from public scrutiny has made her more wary than ever. No matter what, she remains a champion.

For more information about your own cosmetic enhancement, please contact us with questions today. We will help you get in touch with an ideal specialist in your area!