No Plastic Surgery for Sharon Stone? 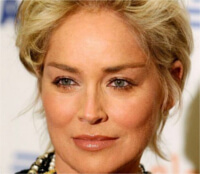 With her much talked about new movie coming out, a majority of the entertainment industry seems focused on the 55 year old actress and her perpetual glamorous looks. Has Sharon Stone received plastic surgery?

Happy to Be Sharon Stone

According to a recent interview with New You magazine, Stone claims having to endure years of cosmetic surgeons who have endeavored, apparently unsuccessfully, to have the star undergo facelifts to retain her famous looks. Says Stone, “I can't tell you how many doctors try to sell me a facelift. I've even gone as far as having someone talk me into it, but when I went over and looked at pictures of myself, I thought, what are they going to lift!”

Nevertheless, there are some who are curious about Sharon Stone’s seemingly always-youthful face. In an exclusive interview with RadarOnline.com, Dr. Anthony Youn states that Stone’s eyes “appear excessively open, as if she’s had an eyelid lift,” Although he has never treated the actress, Dr. Youn contends that “Her forehead is completely smooth, a possible consequence of Botox injections. Overall she looks quite a bit different from the woman we met on the first Total Recall.”

This is not the first time the claims of Sharon Stone’s surgically untouched face have not gone entirely uncontested. Back in 2004, Stone sued a plastic surgeon from Beverly Hills over defamation and libel for apparently falsely claiming that he did some touchup work on her face.

According to Stone, “I don’t think there is anything wrong with cosmetic surgery at all. Yes, I have come close - but frankly, I think that in the art of aging well there's this sexuality to having those imperfections. It's sensual.”

Happy to Be You

Unlike Sharon Stone, we do not have to worry continuous press allegations and media scrutiny. That said the pressure to remain looking and feeling youthful and attractive is a common concern for all women as well as men in their middle age, regardless of their celebrity status.

In being recognized as one of the most attractive women to ever come out of Hollywood, Stone may indeed feel comfortable with her sexy “imperfections” but she is addressing only herself. The standards for beauty are personal. As a media star, Stone developed and sustained her career and celebrity on the strength of her physical appearance. Stone’s success has provided her with lavish options to treat the less glamorous aspects of the aging process.

For the rest of us, plastic and cosmetic surgery options can provide real solutions to real problems. Today, plastic surgery is safer and more affordable than ever and provides an opportunity to address important vanity as well as health issues.

Sharon Stone is right. There is nothing wrong with cosmetic surgery and furthermore, individuals should assess whether plastic surgery is something they wish to consider for the sake of themselves, not others. A person should opt to receive plastic or cosmetic surgery because the outcome will contribute to their self-confidence and help them feel healthy, empowered, and motivated.

If you are interested in finding out more about cosmetic and plastic surgery, contact one of our representatives today. We can help schedule a complimentary consultation with a local board-certified specialist in your area. Call or contact us today to get started.