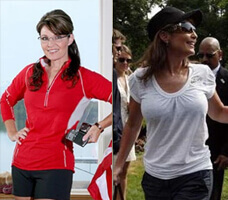 Former Alaska Governor and author Sarah Palin has been accused of many things since putting herself at the forefront of the GOP, but this may be the first time cosmetic surgery rumors have circulated. The rumble began when Palin appeared at Belmont Stakes sporting a surprisingly "bosomier" look than usual. Gossip mills across the Internet lit up with speculation about Palin's new look, although thus far, Palin is remaining mum about the situation.

In Good Company
It is certainly not unusual for those in the spotlight to pursue cosmetic procedures like breast augmentation. In fact, if Palin did get her girls surgically enhanced, she would enjoy the company of starlets like singer Christina Aguilera, supermodel Heidi Klum and actress Alyssa Mylano. Even former Miss California, Carrie Prejean, has undergone breast augmentation, with the price for the procedure picked up by the Miss California pageant.

Others, such as Courteney Cox, Gwen Stefani and Cynthia Nixon, have endured plenty of speculation but have not confirmed any rumors about breast augmentation procedures. In fact, some starlets have actually refused to admit to any type of cosmetic surgery, although many have stated they would be willing to consider it in the future. In an industry where appearance often makes the difference between landing the next job, it makes sense that older actresses would be willing to pursue treatments that would help them regain a youthful look for future roles.

The Prevalence of Breast Augmentation
According to the American Society of Plastic Surgery, 355,671 breast augmentation procedures were performed in the U.S. in 2008. With more choices in implants and surgical procedures, that number is predicted to continue to climb. The large amount of breast augmentation patients on record does seem to indicate that the procedure is gaining social acceptance around the country. It also suggests that as the procedure becomes more refined with fewer complications, more women are getting comfortable with the idea of surgical breast enhancement.

Breast augmentation, like other cosmetic procedures, is a personal choice. While more women are heading to their doctors for these treatment options, each must determine her own reasons for undergoing surgery to enhance her appearance. Some will feel comfortable sharing their experience with others, while others prefer to keep the issue a private one.

Typical Breast Augmentation Candidates
If Palin did undergo breast augmentation, the 46-year-old would be on the more "mature' side of average breast enhancement candidates. The typical breast augmentation patient is in her early thirties and is happy with her appearance and her life overall. Other features of good candidates include:

If you are a reasonable candidate for breast augmentation, you are in good company. With many women seeking this procedure today, the social acceptance of breast augmentation has grown. Your choice to enhance your body through cosmetic procedures is a personal one that should be made between you and your doctor. The people you choose to share your news with are up to you.

To learn more about breast augmentation or to schedule a consultation with a plastic surgeon near you, contact us today.