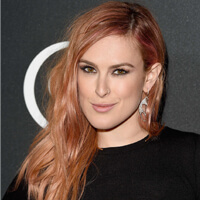 When you’re the daughter of Demi Moore and Bruce Willis, you are bound to be beautiful.

And Rumer Willis is.

Inheriting her parents’ good looks and acting ability, the 26-year-old Los Angeles performer is proving success runs in the family, while making no apologies for who she is, according to an Entertainment Tonight report.

Speaking of Rumer, rumor has it that the eldest Willis sibling went under the knife, having work done to her seemingly perfect stature, notably having her chin shaved.

“I know there's something that came up recently about me getting plastic surgery and it's not true,” Willis told ET.

And if the rumors were true, Willis said she would not be ashamed.

“If I do want to do that -- if I want to get a boob job or change things about myself -- I'm not going to lie about myself,” she explained to ET. “And if I choose to do something to myself, it's because I've thought about it. And if it's going to make me feel better, I won't be ashamed of the choices that I make.”

ET reported that in “August, Rumer's sister Talullah Willis, 20, boldly revealed her issues with body dysmorphia while at the same time stripping down to her bra and panties in a video for StyleLikeU.”

Willis shared with People magazine in October that she considered her sibling brave.

“I have actually been so impressed and blown away with her strength and her openness and willingness,” Willis said in the magazine report.

Most recently hosting a Tracy Paul & Company event to promote TORRID, an edgy fashion brand for plus-size women, Willis said that some of the best advice is to feel beautiful in your own skin no matter what you wear or how you look.

“I am so happy to be hosting an event for a brand like Torrid that makes sure that women of all shapes and sizes can do just that," Willis said in a PR Newswire report.

Be it size or surgery, Willis stands confident in her own beauty and character, no matter what part she plays or whose daughter she may be. That is why The House Bunny co-star and TORRID spokesperson is sure to create her own success regardless of rumors.

“When you grow up like we do, everyone has an opinion of you. Everyone wants to put you in a particular box,” Willis said, adding that photographs often slant people’s perceptions of the famous. “So if you allow yourself to find your value in other people's perceptions of you, then you will never be happy, whether it's good or bad.”