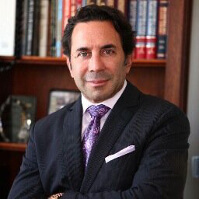 Dr. Paul S. Nassif, renowned rhinoplasty facial plastic surgeon and television personality, is looking to give his media career a bit of a facelift with a new show on plastic and cosmetic surgery options.

Paul Nassif’s unpleasant experiences on the Real Housewives of Beverly Hills program have not deterred the good doctor from reality television altogether. According to an exclusive scoop with US Weekly, the famous plastic surgeon is getting primed to star in a new E! reality series about plastic surgery.

According to US Weekly. the show - still as yet untitled - will feature regular everyday people and primarily focus on “revision plastic surgery” – which is to say plastic surgery that was somehow failed or needs to be redone.

As a well-respected rhinoplasty facial plastic surgeon, Dr. Paul S. Nassif should have no problem hosting such a show. Aside from his medical credentials, Nassif has bulked up his reality show resume with the aforesaid Real Housewives of Beverly Hills as well as Dr. 90210.

Hopefully the show will also serve as a pleasant diversion from Dr. Nassif’s recent messy separation and divorce. Nassif and his former wife, Adrienne Maloof, had been married since 2002. According to inside sources, the couple first separated in July 2012. The divorce was finalized a few months later, leaving the former couple to continue to bicker publicly over how to raise their three children, Gavin, 10, and twins Colin and Christian, 7.

Two months ago, Nassif and Maloof finally settled in court. The divorced couple confirmed the settlement in a joint statement confirmed by US Weekly: “We recently reached an agreement on all outstanding issues related to our divorce settlement and all pending litigation.” According to their statement, “Our first priority is our children's well-being and happiness. As their parents and advocates, that is our goal. Our children are our most important treasures and need to be treated with the respect and privacy they deserve.”

Thankfully, the drama is all over now, but we will always the re-runs to remind us of the good times (and not so good times). Best of luck Dr. Nassif on the new plastic and cosmetic surgery reality series, see you in syndication.

Want to learn more about plastic surgery? Feel free to contact one of our representatives to schedule a consultation with a board certified doctor today!