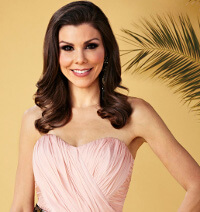 Season 7 of The Real Housewives of Orange County revisits some of Bravo’s most familiar faces while also introducing a new (brunette!) housewife. While all of the Housewives franchises are known for their exploitation of luxury and extravagance, Orange County is the original city in which shopping sprees, nannies, Bentleys, and plastic surgery are captured by a camera crew. Living in Orange County seems like a constant competition for these housewives, who regularly rely on plastic surgery to maintain their bombshell looks.

Vicky Gunvalson. As the only original cast member from Season 1, Vicky Gunvalson is known for her business savvy and thirst for power. She is also the oldest member of the housewives clan, which means more upkeep. Vicky has admitted to having breast implants for some time, as well as regular Botox and Juvederm injections. After her divorce from Donn, Vicky underwent a series of procedures tabloids called a “divorce makeover.” A laser skin rejuvenation improved the look of her large pores and scares left from cystic acne. She had more fillers put in her face for a softer, more youthful look, as well as lip injections for a plumper pout. Vicky also had body contouring on her stomach, love handles, and thighs to slim the areas and decrease cellulite. The fresh-faced blonde spent nearly $8,000 on the makeover and admits that she “wants to have it all.”

Tamra Vieth-Barney. Tamra’s seasonal mottos reflect her image-centered personality: “I’m the hottest housewife in Orange County,” “Housewives come younger, but they don’t come hotter,” and “I’m done being a trophy wife, freedom only makes me hotter” to name a few. Barney’s first foray into plastic surgery started with a breast augmentation, which took her 34A breasts to 34DD. But Tamra thought the implants overwhelmed her petite frame: “They came out on the sides and touched in the middle. Bathing suits and bras didn't fit, and my breasts made every button-up shirt too small.” She replaced her implants with B cups, which suit her well. Tamra is also open about her use of Botox, which she uses on her forehead, crow’s feet, and around the mouth to keep wrinkles at bay.

Gretchen Rossi. Gretchen is only 33 years old and claims to promote a natural lifestyle but steering clear of plastic surgery. But an ex-beau of the blonde stunner says that Gretchen gets Botox injections in her forehead every six weeks. He also claimed that Gretchen gets regular IPL Photofacials to keep fine lines from forming.

Alexis Bellino. Alexis joined the cast of The Real Housewives of Orange County in Season 5. She shook up the girl-power group with her traditional housewife values and Christian-centered home. Despite reciting Biblical passages, Alexis maintains a moralistic defense of the plastic surgery she’s had. She’s had breast implants, lip augmentation, and most recently a rhinoplasty. What would Jesus think of Alexis’ not so natural parts? “I believe it is okay for me to have a procedure done on my body because it boosts my confidence,” said Alexis. “And I believe that God wants me to be happy.”

Heather Dubrow. Heather is the newest housewife in Orange County, and as if her brown hair wasn’t enough of a shock, she’s also stunned the fellow housewives with her apparent wealth and taste for finer things. Heather’s husband is renowned plastic surgeon Terry Dubrow, and Heather jokingly says that her marriage to him was “an investment for [her] future.” Heather has admitted to regular Botox usage—even stowing vials in her refrigerator. She is also a fan of Sculptra, which she uses in her nasolabial folds. While Heather has said that her plastic surgery ends there, her face looks quite artificial. Her protruding cheeks are evident of facial implants and her upward curving eyes (a la Kim Kardashian) are signs of an eye lift. Although Heather claims to be totally natural, she may be the most plastic of the bunch.

The Real Housewives of Orange County display some amazing—and not so amazing—plastic surgery work. If you’d like to learn more about any of the procedures mentioned in this article, contact our representatives. We’ll book you a consultation with a board-certified plastic surgeon in your area that specializes in the procedure.