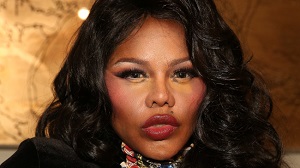 Brooklyn-born rap star Lil' Kim has the media either making up stories or uncovering the truth as the 39-year-old rapper’s appearance has once again ignited plastic surgery rumors.

The International Business Times brought the subject up at the end of April in their article “Lil’ Kim Sparks Plastic Surgery Rumors During ‘Dancing With the Stars’ Performance.” For the show’s 10th Anniversary special, the rapper performed “Lady Marmalade” alongside Patti LaBelle and Amber Riley, but most people were gabbing about Kim’s face rather than the show itself.

“Some thought her face looked so distorted that it scared them. She displayed oversized lips, a smaller nose, heavily lined eyebrows and high cheekbones, which prompted some to say she looked like a lion and others to confess that she looked simply unrecognizable,” says International Business Times. Two years ago, the Huffington Post reported how Lil' Kim showed up at the Hot 97 Summer Jam XX concert looking like a completely different lady. Reporting how dissimilar she appeared, the media outlet gave Lil' Kim a chance to counter. Though she did not speak personally, her representative C.J. Carter called the rumors "fictitious, malicious, and despicable."

Talking to E! News, Carter continued, stating that "We would like to inform fans, the media, and the general public that this is nothing more than the blog site doing its best to conjure up much needed publicity and what better way to do so, than to take an American music icon and create a fictitious platform in which to disrespect and humiliate. We at Team Lil Kim are not taking this lying down and are taking this matter very seriously."

Though a former Candies and Baby Phat model and spokesperson for Old Navy and several vodka brands, Lil' Kim is more well known as a cover girl for MAC VIVA GLAM, a non-profit makeup line created to help fund the eradication of AIDS, which has more recently been represented by mega stars including Lady Gaga, Cyndi Lauper, Nicki Minaj and Miley Cyrus. The Huffington Post documented Lil’ Kim’s new look in 2013, which even resulted in a feud with talk show host Wendy Williams, who called the rapper out on her show. "Kim, in my mind, I know your goal was always to look like La Toya Jackson,” Williams said. “You've out-La Toya'd La Toya in your new look, and don't blame Photoshopping. Blame your plastic surgeon, girl." Lil’ Kim fired back on Twitter, saying “B**** Y didn't U show the side by side pic. This pic is photoshopped & U know it. U hating B****. A bad angle will never make me look like that.”

Lil' Kim has consistently denied getting any plastic surgery throughout the years. Brewing up the past in cyberspace, Twitter began to heat up again with fans freaking out over her face, says International Business Times. “Okay Lil Kim. What is it going to take for you to stop with the plastic surgery. Cuz girl,” tweeted @Star24Semaj. The strand continued with @KellyM716 tweeting “Lil Kim's plastic surgery scares me. She really didn't need to change anything. Doesn't even look like her anymore,” and @throughthelinz adding, “It’s time for someone to 86 Lil’Kim on the plastic surgery. Yikes.”

Unlike her back and forth with Williams two years ago, however, Lil' Kim ignored the gossip and shared photos from Dancing With the Stars instead.