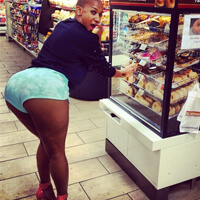 It’s the new nose job. More and more women have been in the headlines for undergoing butt implants the past couple years. Unfortunately, many of these procedures turn out botched on the black market.

Most celebrities have tried to hide the augmentation, while some, like Nicki Minaj, have been much more vocal about the procedure. After hearing rumors for months that she underwent butt implant surgery, Minaj addressed the speculation in 2011 with her rap in Big Sean’s song “Dance,” singing “Kiss my a— and my an— ‘cause it’s finally famous / And it’s finally soft, yeah, it’s finally solved! / I don’t know man, guess them a— shots wore off!”

Thanks to the popularity of curvy hip-hop music video vixens like Nicki Minaj, butt implants have become a fairly popular surgery procedure. Unfortunately, many women sought butt injections on the black market, with some resulting in death. Memphis based model Natasha Stewart, known as “Pebbelz Da Model,” was charged with murder after illegally injecting and killing another Atlanta woman with concrete. Stewart is now facing a potential life sentence.

“Get your liposuction, get your butt lift, get anything that you think on your body is, you know, not so perfect and you want to change,” Lee advocated for the plastic surgery procedure in the videos as a way for self liberation, according to International Business Times. “Change whatever little flaw that you may think you have. I want you guys to see I’m totally comfortable with everyone knowing that I definitely went through plastic surgery.”

Unfortunately, while Lee underwent the butt implant procedure legally, thousands upon thousands of women are still receiving extremely dangerous butt injections on the black market, leading to skin infections and abscesses in many cases.

If you or someone you know would like to learn more about plastic surgery or receiving butt injections the safe and legal way, please feel free to schedule a consultation or contact one of our representatives today!