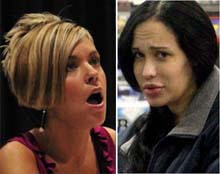 Never before has the term “Crazy Eights” been more suitable. Already recognized as America’s two most famous multiple-babies-mamas, Octomom Nadya Suleman and “Jon & Kate Plus 8” star Kate Gosselin have recently seen their tabloid sagas converge for the first time, and as one might expect, things got ugly. Rather than their respective litters of children being the issue, however, Suleman and Gosselin reportedly traded barbs over an entirely different issue: plastic surgery.

It’s hard to imagine that the Octomom, plastic surgery diva as she’s generally known to be, would take issue with anyone, let alone a fellow ‘tuplet bearer, for exploring the benefits of cosmetic surgery. However, that’s exactly what Nadya Suleman did in a recent interview with Radar Online, claiming that Kate Gosselin “cheated” by undergoing plastic surgery after giving birth to her septuplets. Insert your pot calling the kettle black comments here.

For those lucky enough not to recognize the irony, Suleman’s plastic surgery was a hot topic in the press for weeks following her first public appearances after giving birth to octuplets (bringing her grand total of kids to 14). Not only did photo comparisons reveal a likely lip augmentation procedure, cheek implants, rhinoplasty, and possible breast augmentation, but the combination of these procedures left many wondering if Suleman was consciously attempting to turn herself into actress Angelina Jolie; a noted fan of babies in her own right.

Even now, Octomom’s plastic surgery generates a lot of conversation, as many critics wonder if Suleman’s expenditure of cash on cosmetic surgery, rather than her kids, indicates a serious mental issue that might make her an unfit mother. Irony upon ironies, Kate Gosselin herself has been one of these critics. When originally asked about the Octomom this past February, Gosselin indicated she was concerned for Suleman’s mental health and ability to care for her 14 kids effectively by herself. Mind you, this was before Gosselin’s own obsessive-complusive tendencies became fodder for similar criticism, and long before her husband Jon’s extramarital activities put her marriage on the rocks and “Jon and Kate Plus 8” at the top of the ratings.

In any case, it took a few months for the Octomom to actually see the video of Kate’s comments (given on the Dr. Phil Show), and once she did, it was time to fire back. Suleman vs Gosselin was on. The Octomom aggressively defended her own parenting skills while turning the attack back on Kate, accusing Gosselin of being “desperate for attention.” Again, pots and kettles will say what they will, but the strangest part of the feud still has to be Suleman’s plastic surgery barbs. It makes one wonder whether those who question the Octomom’s psychological state might be on to something, because Suleman clearly saw nothing odd about setting her sights on Kate Gosselin’s plastic surgery procedures. For someone who was mercilessly hounded for her own operations and those painstakingly crafted Angelina Jolie lips, Octomom apparently had a short memory.

Bickering aside, Gosselin’s plastic surgery and Octomom’s plastic surgery both showcase a new trend for recent mothers, and not just moms who’ve birthed a soccer squad. Cosmetic surgery is a very common way for mothers to quickly and effectively regain their figure after that arduous nine months. When handled rationally by a board certified plastic surgeon, a “Mommy Makeover” can work wonders. When taken to extremes, as in Octomom’s apparent Angelina Jolie fixation, things might not go as smoothly. As far as we’re concerned, though, the lesson should be not to use reality stars like Nadya Suleman and Kate Gosselin as examples to follow when it comes to plastic surgery… or anything else for that matter.