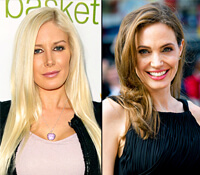 For those of you who think that Heidi Montag and Angelina Jolie have nothing in common, think again. Apparently, according to a recent Us Weekly in their November 18 issue, the media celebrity had her F-cup breasts implants removed by the same doctor responsible for Angelina Jolie’s mastectomy. Being a media celebrity is not easy for either, as their stories clearly indicate.

In 2010, Heidi Montag, began a massive cosmetic overhaul on her body. Some of the procedures she has had have included: nose job revision, nasolabial folds and lips, neck liposuction, ear pinning, mini brow lift, Botox in her forehead and frown area, chin reduction, fat injections in her cheeks, liposuction on her waist, hips, inner and outer thighs, buttock augmentation and breast augmentation revision.

Montag obtained her second breast augmentation a few years back and increased her bust size to an F cup. In her exclusive interview with “Entertainment Tonight”, Montag says she does not regret getting the implants at all. Irascible as ever, Montag is also the first to admit that although she liked the attention and benefited from the extreme look, it was not complete bliss. According to Montag, her implants apparently began to cause the celebrity serious health issues. The complications that resulted were so severe that she was forced to have her F cup sized implants completely removed.

Montag’s new doctor, Dr. Jay Orringer, injected the excessive media celebrity with some direct truth. “...My new doctor was like, ‘You should never have been allowed by the doctor to get implants this big.’ ... I put my security and sexuality in my breast size instead of my confidence.”

As a consequence of Montag's implants, the not yet 30-year-old reality show personality says she has experienced a wide range of major health problems, including a ruptured disc in her neck, muscular and spinal damage to her back, and overall numbness in her arm due to pinched nerves. At last putting her health first, Montag had her F cup implants replaced with D cup implants.

The opposite extreme applies for Angelina Jolie. This past February, the 38-year-old movie star underwent a complicated double mastectomy to remove both breasts and reduce her risk of cancer. In her New York Times Op-ed piece, Jolie cited Dr. Jay Orringer and her motivations.

“I can tell my children that they don't need to fear they will lose me to breast cancer.” For Jolie, her motivations went beyond cosmetic concerns, as her instincts focused on survival and became material. “It is reassuring that they see nothing that makes them uncomfortable. They can see my small scars and that's it. Everything else is just Mommy, the same as she always was.”