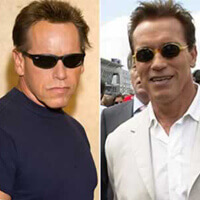 When Manhattan-based freelance fashion stylist Nino Dean underwent facial cosmetic surgery 13 years ago, he asked for a look similar if not identical to that of Vanessa Paradis, the French singer who formerly dated Johnny Depp.

“I wanted her baby face,” the 37-year-old told the New York Times. “I still find her my favorite beauty of all.”

Dean is not the only one to undergo cosmetic procedures to look like his favorite celebrity. Countless cosmetic surgery patients have altered their appearances to resemble movie stars or pop singers.

Plastic surgeons claim that such requests for celebrity makeovers occur on a regular basis.

Although it’s nearly impossible to recreate another person’s image due to such natural physical characteristics as bone structure and facial proportions, plastic surgeons can often achieve a striking similarity to the subject at hand.

“We really cannot make someone pass for someone else,” Santa Monica based plastic surgeon and American Society for Aesthetic Plastic Surgery spokesman Dr. Steven Teitelbaum told the Times. “At most, we can try to mimic a feature, such as a nice nose, or even to put in a grossly disproportionate chin implant to mimic the nearly cartoonish visage of Jay Leno.”

However, Teitelbaum comments that it is possible to repeat the same procedure on different patients.

“An overly high brow lift, excessive nasal reduction, excessively filled lips,” Teitelbaum listed to the Times. “You can go much farther to mimic features of a Michael Jackson, who is himself a plastic surgical joke, than to create a resemblance to someone who has never had surgery.”

Sometimes, patients simply want to mimic one feature of their favorite celebrity, a much easier task for plastic surgeons.

For example, Stacy Shanahan, a 49-year-old account executive for a Mission Viejo based packing company, has always wanted to look more like Heather Locklear, with whom she already shares similar physical attributes, like blonde hair, blue-green eyes and delicate features.

“I know it sounds crazy, but I’d be happy being more like her,” Shanahan admitted to the Times. “I wouldn’t miss how I look. She’s beautiful.”

Shanahan asked Newport Beach based plastic surgeon Dr. Burr von Maur, who had previously given her a breast lift, to help with her transformation. Von Maur decided to perform a 6,500 dollar rhinoplasty on Shanahan to enhance her facial features in the spirit of Locklear.

“You can never duplicate something; you can’t clone somebody,” Von Maur explained to the Times. “It’s best to enhance the patient’s own features, so we can unearth the beauty that lies underneath without radically altering their appearance.”

These plastic surgeons claim they make sure to distinguish between the patients with specific medical or aesthetic concerns and body dysmorphic disorder sufferers, who are intensely preoccupied or obsessed with a perceived flaw in their physical appearance.

“I had a patient who went from doctor to doctor trying to get surgery to look like Brad Pitt,” Upper East Side dermatologist and psychiatrist Dr. Amy Wechsler commented to the Times. “There was this sense of, ‘My life will be so much better if I had this person’s X, Y or Z’ It can become an obsession.”

“You respect a patient’s autonomy,” Michigan State University professor of philosophy and medical ethics Leonard Fleck explained to the Times. However, any doctor that disagrees with the patient’s choice “is not morally obligated to follow their wishes. He can say, ‘I feel that that’s a really bad idea.”