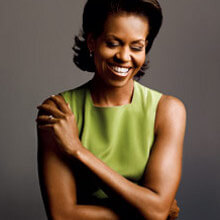 Earlier last month, a flood of articles around the world credited Michelle Obama as being responsible for an unprecedented surge in cosmetic arm lift surgery. Major news sources verified the first lady as the inspiration for thousands of individuals seeking out the increasingly popular surgical procedure, which is intended to tighten and tone sagging arms.

But that's not exactly true.

Arm Lifts On The Rise

According to the American Society of Plastic Surgeons (ASPS), upper arm lifts have been steadily rising since 2000, an increase starting a full nine years before Barack Obama assumed office. The latest statistics released by ASPS reveal that arm lifts in women has soared to a whopping 4,378 percent over the last decade. So why has everyone focused on Michelle Obama? What explains the media’s focus on Obama’s influence on the nation’s surge on arm lift surgery?

Celebrities have always provided an influence on our interests and style, including body image. People are inclined to compare themselves to people that they see in the media, and that includes those that grace the White House.

Former First Lady Jacqueline Kennedy was well known for her bouffant hairstyle as well as her signature Halston pillbox hats in the 1960s. Determined to be taken seriously in a traditionally masculine world, former British Prime Minister Margaret Thatcher and former First Lady Nancy Reagan both adapted less classically feminine hairstyles and helped popularize shoulder-padded clothing for women. One might say Michelle Obama represents third-wave feminism, and her infamous bangs and bare arm fashion represents a larger collective response against the perceived failures of or backlash against initiatives and movements created by Second-wave feminism in the generation prior. Just as Kennedy, Thatcher, and Reagan helped define what it meant to be an independent woman for their generation, Obama is looked upon as a catalyst for many women looking to improve their attitude and appearance.

At nearly 50 years old and a mother of two, Michelle Obama has simultaneously maintained an impressive position of leadership and power. In this respect, Michelle Obama represents an ideal for many modern women. Unlike her predecessors Jackie Kennedy or Thatcher and Reagan, who had to compromise power or appeal, Michelle Obama has been able to indulge both qualities without compromising her integrity. This makes her unique among female celebrities and even more influential.

As with any marginally represented group, individuals seek out those in a position of authority or even celebrity for guidance. For this reason, there are numerous individuals out there who wish to strive towards the same qualities of they admire. As a modern woman, Michelle Obama has embraced new ideas of feminism, from social responsibilities to yes— even wardrobe choices and physical attributes. Consequently, it becomes clear why so many people believe the First Lady is solely responsible for the rise in cosmetic arm lift surgery.

Today, a woman opting for brachioplasty, or upper arm lifts, should not be making her choice because of the expectations of others—nor should she feel pressure from others. She should choose to receive upper arm lifts because the procedure will contribute to her well-being and assist her in feeling empowered to do what she is capable of doing. To learn more about arm lifts or to schedule a consultation with a plastic surgeon, contact our representatives now.