Man Spent HOW Much on Plastic Surgery to Look Like Kim Kardashian?! 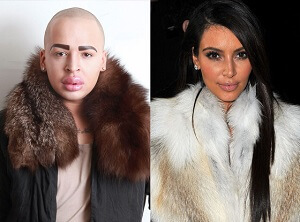 Could you imagine spending $150,000 on plastic surgery to look like Kim Kardashian?

Not only did 23-year-old Jordan James Parke envision it, he did it.

Calling the British make-up artist an idiot for doing so, and saying he overpaid for all of his facial surgery, E! Online Soup News reports, “That act alone is so laughably stupid it will hurt your brain to even fathom it.”

Tech Times lends more sympathy to Parke as they point out that all the procedures he has undergone thus far have not served their purpose.

“We’re not sure how this is going to work out for Jordan, because, so far, the $150,000 in cosmetic surgeries doesn’t appear to make him achieve the looks of Kim,” Tech Times reported.

Between Botox injections, laser hair removal, eyebrow tattoos and up to 50 reported lip-plumping treatments, the unknown English man wants to look even more like the famed American woman, who has notably gone under the knife herself.

And while tabloids are telling the all-too-true tale, what does Parke think?

“I laugh when people try to insult me by telling me I look plastic or fake,” Parke said in a UK Sun interview. Claiming to seek more attention with added surgeries, Parke confesses negative or positive, he loves being noticed.

“And if anything, it just spurs me on to get more work done,” Parke told People, adding it is not only Kardashian Parke idolizes but also Mariah Carey and Angela Lansbury, featured on his Twitter account.

Calling Kardashian perfect in all ways, Parke said he first fell in love with the 33-year-old cultural icon when watching the hit reality show Keeping Up With the Kardashians. Though his attempts at being Karadashian’s doppelganger have been widely criticized, Parke continues to be his own man while trying to look like a woman, with People reporting that his next planned procedure is a nose job.

Pointing out the high price it has cost Jordan to attempt to resemble the socialite, E! Online Soup News writes Jordan could have achieved the look for far less, simply using a donkey to break his nose, bees to attack his lips and markers to draw his larger than life eyebrows. Rather than $150,000, it would only total approximately $5,000, leaving a lot of extra cash.

“Imagine what he could do with that money? Probably something else toxic, self-damaging, and vapid,” E! reported.