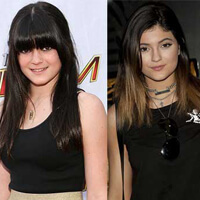 Have Kylie and Kendall Jenner gotten plastic surgery? The pair of media personalities who can either boast or lament being the half sister to those wild and krazy Kardashians (i.e. Kourtney Kardashian, Kim Kardashian, and Khloe Kardashian) and daughter to Kris Jenner and Bruce Jenner, has reportedly gotten both a nose job and Botox Injections. That latest scuttlebutt is that the littlest Kardashian has gotten lip injections.

Despite her junior age, Kylie Jenner seems to be finally hitching a ride on the Kardahshian cosmetic bandwagon. It only took 16 years! A new report in the admittedly sensational magazine In Touch Weekly, the American celebrity gossip magazine. The magazine has made overt suggestion that the very, very young reality TV personality has already gone under the knife, possibly more than one. This “dramatic transformation” since last year is a result of these purported procedures and surgeries.

While ‘In Touch Weekly’ was unable to secure a comment from Kylie Jenner’s doctor or any other doctor affiliated with the family, they did obtain verification from one plastic surgeon who claims Kylie’s face has “changed”. According to the good doctor, “Considering the work her sisters have had, I wouldn’t be surprised if she got an early start.” The plastic surgeon also claims that Jenner has joined a long line of Jenners and Kardashians who may have had “Botox injections in the forehead”. Let’s just say it runs in the family.

’OK! Magazine’ also claims to have an inside source, who claims: "Kylie constantly hears people talk about how much more attractive Kendall is, and the comparisons have really taken a toll on her. Kylie has grown up in a family that focuses on beauty and self-image, so it seems natural that she considers those things valuable. In the Kardashian-Jenner household, trying to look 'perfect' is an actual pursuit, and plastic surgery can be seen as a tool for that."

A different doctor, Dr. Diamond, also unaffiliated with Kylie Jenner’s purported history, corroborates with other rumors. “It appears she has had hyaluronic acid injected into her lips. This is administered via fillers such as Juvederm and Restylane,” Dr. Diamond told Radar Online, the American entertainment and gossip website.

Further reports insinuate that the 16 going on 17 year old Kylie Jenner also had rhinoplasty and lip injections. With so much public scrutiny, it is of little wonder that sources are claiming that Kylie “felt like an ugly duckling”. Kylie would not be the first to be pressured into considering plastic surgery at a young age. According to Khloe Kardashian, make-up artists continually told her that she should get a nose job.

Of course, rumors that the irrepressible Kris Jenner “encourages” plastic surgery does help the situation at all either. Khloe Kardashian say she was barely 9 years old when she overheard her mother Kris Jenner announce to her friend that her daughter needed a nose job. "When I was around nine I overheard my mom telling her friend I needed a nose job," Khloe said. "I was shocked; I hadn't even thought about it."

Be that as it may, what Kris is saying to Kylie is unknown and uncertain. A representative for the Kardashian has denied these allegations of coercion for her 17 year old daughter to Gossip Cop, stating “This a blatant lie and not true.” Time and re-runs will tell.

If you are interested in your own surgery, please contact us to get started! We can help you begin your path to a brand new you.