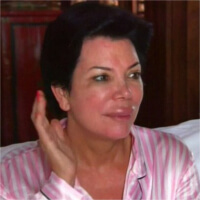 The permanent look of surprise on Kris Jenner’s face from years of plastic surgery may actual be genuine. According to one inside source, the defaulted famous television personality has spent in excess of over one million dollars on plastic surgery over the years.

Recent reports by Kris Jenner’s younger sister Karen Houghton insinuating plastic surgery addiction is turning heads. According to her, Jenner is infatuated with staving off age to remain looking as young as possible. Houghton claims that her older has battled with weight problems her entire life, ultimately resorting to plastic surgery to deal with the apparent stress and anxiety in her life. According to an interview with InTouch (October 9) Karen Houghton confided, “She was kind of chubby when she was little.” Not all of Houghton’s comments were emphatic either, flatly stating: “Kris is vain. The whole world knows it.”

The exploits of Kris Jenner and her ongoing plastic surgery is nothing terribly new or shocking in the news department. Jenner has been extremely candid about her plastic surgeries, going as far as receiving a facelift on her reality television show, “Keeping Up With the Kardashians” in 2011. Jenner, age 57, and the mother of six biological children, has confessed (or boasted) about obtaining routine Botox and liposuction injections. She has also admitted to getting two breast augmentations, joking that “Everyone needs a fresh set [of breast implants] every 20 years.” There are even reports of her getting a Rhinoplasty surgery done.

Celebrity plastic surgery is nothing new, especially for the Kardashians, but there is nothing funny about plastic surgery addiction. Karen Houghton says her sister focuses on surgery to deal with the pressures of her life with the jet-set and the fast-paced nature of her life and media exposure. According to Houghton, “If something is upsetting you, you are either going to hit the bottle, do drugs, go to the gym constantly, or you are going to work.”

So what has inspired Kris Jenner’s recent preponderance of plastic surgery procedures? “It’s an addiction and it’s because you are unhappy. You do these things because there’s a hole that’s not filled,” says Houghton. As a mother of six, including the notorious Kim Kardashian, the media scrutiny and spotlight would be unavoidable for anyone, let alone someone actively seeking it. Recent family separations, including Khloe Kardashian from her husband Lamar Odom and Jenner’s own separation from her husband, former Olympic gold medalist Bruce Jenner, after 22 years of marriage, may only further intensify that pressure and addiction.

If you or someone you know would like to learn more about plastic surgery or is considering a procedure, please contact our team of representatives. They will help you locate a board certified doctor in your areatoday!