Does Kate Middleton Have the Perfect Nose? 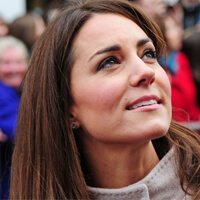 A United States based team of plastic surgeons recently submitted digital portraits of young white women to focus groups and online social networks with people in the same age group, asking them to rate the attractiveness of the images.

The study, researched at the University of California at Irvine, revealed that the ideal nose for a woman in that demographic is slightly upturned at an angle of 106 degrees. Kate Middleton, Scarlett Johansson, Jessica Biel and Kate Beckinsale all fit this ideal.

“Throughout history, artists and scholars have been engrossed in the pursuit of capturing what constitutes beauty,” the study’s author Dr. Omar Ahmed told Time.

Naturally, beauty ideals and standards have shifted over the centuries and tend to differ between ethnicities and global regions.

Since there’s so much data to work with, surgeons only examined ideals for white women between the ages of 18 and 25. The study reported that this demographic is the most heavily studied in the rhinoplasty industry.

“There is a range of rotation that’s usually applied [in rhinoplasties], which is 90 to 100 degrees for men and 95 to 110 degrees for women,” Dr. Charles East of the British Association of Aesthetic Plastic Surgeons explained to Time. “This study has ended up somewhere in-between.”

The idea that Kate Middleton’s nose fits the ideal is not new. This spring, New Yorkers scrambled to local plastic surgery offices to request the royal nose.

“A couple months ago, these women started coming into my office and asking for Kate Middleton’s nose,” Manhattan based plastic surgeon and author Dr. Stephen T. Greenberg told the Daily News back in March. “It has become so popular that we have made a file of a dozen Kate Middleton pictures to show patients when they come in for their consultation.”

Arizona-based plastic surgeon Dr. Daniel Shapiro told Fox 10 News in February that he had heard about the Middleton rhinoplasty boom on the East Coast.

“It’s kind of in vogue,” Shapiro explained. “I have friends that are in Manhattan, it is one of the highest percentage procedures now.”

NYU student Jessica Blaier spent about 12,000 dollars on rhinoplasty to make her nose look like Middleton’s.

“Every time she smiled, it’s like, that’s what I want – I want my nose to be like that,” Blaier told ABC’s “Good Morning America” in January.

A psychologist who specializes in the study of facial attributes, Carmen Lefevre told the Daily Mail that there might be an evolutionary preference for Middleton’s nose.

“The symmetry of Kate’s nose, the angle between her lip and the tip of her nose and the minimal amount of nostril on show, are all near-perfect,” Lefevre explained.

If you or someone you know would like to learn more about plastic surgery, feel free to schedule a consultation or contact one of our representatives today!