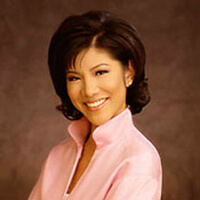 Talk show host Julie Chen recently revealed on The Talk that she underwent plastic surgery about 20 years ago to widen her eyes at the advice of her agent.

Beverly Hills facial plastic surgeon Babak Azizzadeh, M.D., responded to Chen’s revelation, commenting that surgeons are responsible for making sure their patients look natural and appropriate for their ethnicity.

“It is common to encounter patients who want to look more mainstream, or embody a certain characteristic that’s popular at the moment,” said Azizzadeh, according to PR Web. “It is the job of the surgeon to make sure the surgery is done in a manner that respects ethnic characteristics.”

Chen informed viewers that a former employer told her 20 years ago that she would never become a television anchor, because the city did not have a large Asian community and the community would not be able to relate to her. Her agent advised that she undergo plastic surgery to make her eyes bigger.

“It is never an easy decision for someone to change or alter an ethnic characteristic,” said Azizzadeh, according to PR Web. “What’s important, though, is that they seek surgical treatment from a plastic surgeon experienced in ethnic facial plastic surgery. Julie Chen’s surgery was obviously done very well, as ethnic characteristics were preserved, and, without looking at a before picture, you cannot tell she had any work done.”

A world renowned facial plastic and reconstructive surgeon known for his natural-looking results, Azizzadeh commonly performs the procedure Chen underwent. During Asian blepharoplasty, the surgeon widens the appearance of eyes by creating a crease in the upper eyelid to create a double eyelid fold.

“Asian blepharoplasty is usually an outpatient procedure that only requires a couple days of downtime before the patient can return to work,” explained Azizzadeh, according to PR Web. “When done by an experienced facial plastic surgeon, the Asian blepharoplasty can produce a subtle, natural-looking result.”

Recognized as a Top Doctor by the US News & World Report, Azizzadeh completed a fellowship in facial plastic and reconstructive surgery at the prestigious Harvard Medical School.

Want to learn more about plastic surgery? Feel free to contact one of our representatives to schedule a consultation with a board certified doctor today!