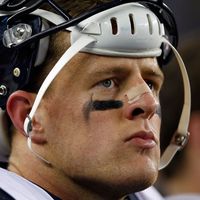 After a disappointing NFL season for his team, defensive end JJ Watt may not be able to fix the Houston Texans, but he may decide to fix an ugly nose injury in the offseason. Watt told the Associated Press that he is considering getting plastic surgery to repair a wound on the bridge of his nose that has repeatedly been re-injured over the course of the 2013 season. By the time the 2014 season rolls around, Watt may be sporting a nose free of the unsightly gash.

The wound on Watt’s nose was suffered early this season. He received stitches after the game in which it occurred, as well as after the following game when game action caused it to re-open. After that, Watt stopped bothering with the stitches, although the gash continued to be reaggravated each game. It often cause blood to run down his face, which was often captured by tv cameras over the course of the season, especially when Watt was on the sidelines with his helmet removed. By the end of the year, Watt had a permanent indentation and red mark on the bridge of his nose, which he reports that his mother hates. It is partially at her behest that Watt is considering the surgery.

A little over a year ago, if JJ Watt was considering plastic surgery, few people would have been likely to hear about it. But after a flashy interception (which he returned for a touchdown) in last January’s playoff game against the Bengals brought Watt attention at the end of the 2011 season, he followed up by becoming a household name due to his superb play in 2012. Watt led the league with 20.5 sacks while also batting down 16 passes - an unheard-of combination - on his way to winning the NFL Defensive Player of the Year award. Watt’s numbers this season fell off from those lofty heights, but he continued to play at a high level, being elected to his second consecutive Pro Bowl, despite his team’s disappointing 2-14 finish.

While playing for one of the worst teams in the NFL tends to decrease the attention that even a star player receives, Watt’s profile remained high this year due to a number of endorsement deals and oft-played commercials - the benefits of his 2012 breakout. He appeared in commercials for Ford, the NFL’s Play 60 campaign (which encourages children to exercise for 60 minutes a day), and a series of ads for Yahoo! Fantasy Football which allowed him to showcase his sense of humor. All of those commercials aired frequently during NFL game broadcasts this season, keeping Watt visible even to those not watching his Texans. Getting rid of his unsightly injury certainly won’t hurt his side job as a pitchman.

Plastic surgeon to the celebrities Dr. Franklin Rose told CultureMap Houston that “Cosmetic surgery would serve to stabilize the injury and allow for further athletic endeavors,” while also suggesting that Watt would likely need external scar revisions (a procedure which minimizes the appearance of scars). Dr. Rose went on to posit that Watt could benefit from the surgery not only cosmetically but also structurally, by correcting any “nasal airway obstruction” that may have been caused by the initial fracture