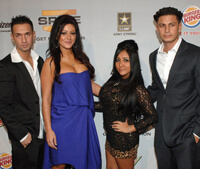 The Situation. Snooki. J-WOWW, Vinny, Pauly D, Ronnie, Sammi, Angela. Chances are, you only need to hear a few of those names and you know exactly which television show we’re talking about. If you’ve seen the series, or even glimpsed celebrity photos of MTV’s latest reality stars, then you’ve no doubt noticed that the cast of Jersey Shore looks conspicuously enhanced. The deep dark tans, long fake nails, muscles and curves—it doesn’t take long to start wondering just how much work these young celebs have put into their bodies. If you’ve watched the show, then you’re well acquainted with the pre-party routine, dubbed “GTL” (or gym, tan, laundry for those who are rusty in their Jersey Shore trivia) by the cast members, but tabloids have been quick to question: Have Jersey Shore's self-proclaimed "guidos" and "guidettes" undergone plastic surgery?

The Jersey Shore cast has been mum when it comes to admitting any cosmetic enhancements, with one exception. J-WOWW (aka Jenni Farley) has been very open about her breast augmentation surgery, which she bought for herself as a 21st birthday present. J-WOWW’s bust line has earned more than its fair share of criticism. More than one gossip site has claimed that her implants are poorly placed and rest too far apart. However, criticism is just one part of being thrust into the limelight, and the curvy 23-year-old has expressed her satisfaction with her breast enhancement.

Meanwhile, Snooki (aka Nicole Polizzi) claims that she would consider getting a breast lift, although, unlike JWoww, she hasn’t fessed up to any past cosmetic enhancements. Some gossip columnists have also argued that The Situation and other Jersey Shore men may have had such plastic surgeries such as calf implants; others, however, have countered that these "guidos" are in prime shape because they work out (GTL!) religiously, and, well, they’re young.

Young, attractive reality stars often throw plastic surgery into the spotlight, as the gossip surrounding their bodies builds with their stardom. Breast enhancements, breast lifts, and calf implants, however, are realistic options for many people who want to look their best—- not just young celebrities. Breast augmentation ranges from person to person—- so you don’t have to come out looking as buxom as J-WOWW, but you could if that’s what you really wanted. Snooki’s interest in a breast lift is one that many ample-bosomed women share. And calf implants, along with bicep implants, and pec implants, are common surgeries requested by men seeking a little assistance in improving their physique.

Plastic Surgery Portal provides a wealth of information where you can learn more about these kinds of plastic surgeries and much more. You can gather a real-life view of these cosmetic enhancements and decide whether a procedure is right for you. If you’re trying to look like the cast member of Jersey Shore, however, we’ve got one piece of advice—- over the long haul, it's always better to strive to look like the best version of yourself, not someone else. This is especially true when it comes to reality stars who the world is not likely to remember a year from now-- perfect tans aside.

To set up your plastic surgery consultation with a board-certified specialist in your area, contact us today via phone or online form. He or she can answer all your questions and guarantee that you get the best possible results. Yes, much better than J-WOWW's.