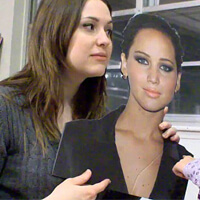 How far would you go to look like your favorite celebrity? In a new trend of plastic and cosmetic surgery, individuals are going under the knife to more closely resemble specifics celebrities. While some criticize their motivations as shallow and superficial, others claim that surgeries help patients develop self-confidence and self-empowerment.

A young woman who goes by the name of Kitty is so enamored over mega movie star Jennifer Lawrence that she underwent a half a dozen plastic and cosmetic surgery procedures to achieve the looks of the famous film actress.

"I can appreciate that her personality is spunky and fun," Kitty said. "I can appreciate that her body is banging." Despite the level of levity, there is some seriousness to Kitty’s motivations. "I'm not trying to look like Pamela Anderson here during her 'Baywatch' days," Kitty said. "I'm trying to look like a very capable, very personal level-headed female who is an Academy Award winner."

Kitty has not approached the transformation lightly. She is a 30 year old professional dog trainer as well as a wife and mother to a young 5 year old daughter. After consulting with her doctor, she began her month long cosmetic quest in early February at First Surgical Hospital in Houston, Texas.

Says Kitty, "I am a strong woman. I am in charge of how I look and I can change that and then change that again if I want." According to a special report on ABC News, “Kitty underwent $25,000 worth of surgeries -- minus a discount from the doctor for appearing on television -- which included liposuction to her face and body, a breast augmentation, rhinoplasty and fat grafts to her cheeks and buttocks. The entire procedure took six hours and her recovery took a several weeks.”

Kitty says motherhood played a major factor in her cosmetic transformation: "the reason why I decided to get surgery is because post having my daughter, I wasn't quite as comfortable with my body," she said. "I don't think you have to be crazy to want to look better or feel better about yourself. That's not crazy."

In the ABC report, Kitty concedes and says that the money could have been spent on her daughter’s college education but insists she made the right decision.

"Basically the money that I had for this was money that I had saved from previous job ... so it was sort of a 'me fund,'" Kitty said. "My child's only five and I'm still just barely 30 so I think I still feel like maybe it's naiveté but I still have some time to rack up some money to help her when the time comes."