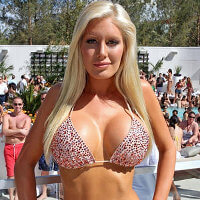 If you haven’t heard Heidi Montag’s name in awhile, the buxom blonde has you right where she wants you. The fame-hungry former star of MTV scripted reality shows like Laguna Beach and The Hills has purposely kept a low profile since her plastic surgery extravaganza in 2010, shying away from nearly all photographers and interviews. Montag famously went under the knife for a total body transformation of ten procedures, including super-sized breast implants, a chin reduction, and possibly rib removal. Although she immediately praised her plastic surgeon and claimed to love her new body, Montag’s cheery disposition faded over the months following. She showcased unsightly scars in an issue of Life & Style, and spoke ill of her doctor’s training and techniques. Two years later, Montag is back—and eager to talk about her experience with plastic surgery.

“I’ll never be able to be Heidi Montag, a normal person, again,” she told Celebuzz of her augmented look. “What [I've] done is something that you can’t undo and that’s what I didn’t realize. It’s a very different life. It’s like a lifelong sentence.”

She’s not just talking about the plastic surgery. Rewind to 2010, when she and husband Spencer Pratt were all about making themselves media spectacles. Her hair was blonder, her bust bigger, and her so-called candid photoshoots increasingly ridiculous. To Heidi, a total body makeover seemed like the next step. Ten procedures later, The Hills cameras captured her plastic surgery debut. Montag’s mother suffered from a mental breakdown, while media outlets bashed the star’s overdone look.

“I didn’t realize that pretending to be this ‘Hills Heidi,’ this spoiled rich girl who I wasn’t, would almost destroy me… I’m from really humble beginnings. I’ve never been this Hollywood diva, but you get caught up in what you’re pretending to be,” said Montag.

According to Life & Style, Montag’s extensive plastic surgery has resulted in the following scars:

Where Did Heidi Go Wrong?

Before committing to any plastic surgery procedure, it’s important to find a reputable plastic surgeon. Montag made several major missteps that may have caused her the dissatisfaction she feels with her plastic surgery. Although her plastic surgeon, Dr. Frank Ryan, was known for performing on celebrities, (Janice Dickinson, Kendra Wilkinson, Gene Simmons, and Melissa Rivers, to name a few) his records weren’t squeaky clean. In fact, before Dr. Ryan’s death in August 2010, he was in the process of being sued for malpractice by two former clients.

Key things to look for in a plastic surgeon include board certification, extensive education, impressive before/after photographs, and solid word-of-mouth reputation. Many plastic surgeons offer prospective patients the opportunity to speak to previous patients about their experiences.

Most medical experts agree that Dr. Ryan’s choice to put Montag under the knife for such a prolonged period of time was a mistake. Montag’s ten procedures took a total of ten hours to complete, meaning that Montag was exposed to general anesthesia for nearly half a day—outrageous, by most plastic surgeons' standards. Even extensive plastic surgery procedures, like Mommy Makeovers, generally don’t take more than four hours. However, Dr. Ryan defended the decision, citing Montag’s youth as an encouraging factor: “I would never push the envelope. Heidi’s a young, healthy girl: she was cleared medically. It was well within the realm of safety.” Unfortunately, Montag has since admitted that high levels of Demerol, a medication for severe pain, slowed her breathing to a life-threatening five breaths per minute post-op.

Plastic Surgery Portal is dedicated to providing consumers with accurate information on liposuction, breast implants, rhinoplasties, and other plastic surgery procedures. Our network of board-certified plastic surgeons is hand-picked to include the nation’s finest cosmetic specialists. Browse our directory now to find a plastic surgeon in your area.