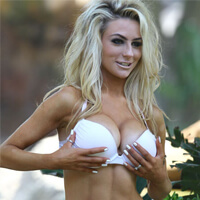 Reality star and teen bride Courtney Stodden has admitted going under the knife to transform her C-cup breasts into size DD. The 18-year-old bombshell recently revealed the results of her breast augmentation procedure, which she says gave her the curves she’s always wanted. Considering the after-pics, most would assume that Stodden’s actor-husband, Doug Hutchinson, has to be enjoying his wife’s decisions as well!

However, Stodden admitted that Hutchinson was not keen on the plastic surgery idea at first. Stodden told Huffington Post, “No one encouraged me, it was all me. He [Hutchinson] was actually kind of against it at first and we got into little debates about it, but I won and here I am.”

Stodden’s debut of her new curves weren’t exactly her first reveal of the procedure. Stodden actually let cameras document the process, by allowing them in on her doctor’s visits prior to the surgery. They were even given a brief stint in the operating room prior to the procedure. The brief film ends with the removal of the bandages, as Stodden’s husband stands by. Stodden, Hutchinson and her doctor all seemed satisfied with the results.

An Overview of Breast Augmentation

Breast augmentation isn’t just for the Hollywood elite – this procedure is one of the most popular cosmetic treatments performed today. The procedure involves the insertion of breast implants to increase fullness and improve the shape and projection of the breasts. Breast augmentation may be used to increase the size of the breasts, replace breast volume after pregnancy or create symmetry between two breasts of different sizes.

Breast augmentation may be performed under local anesthesia with sedation or general anesthesia. The procedure typically takes between one and three hours to complete. Procedures may be performed in a hospital or surgical suite. Recovery from breast surgery takes several days before patients are allowed to return to normal activities.

Saline and silicone implants may be used for breast augmentation. Both types of implants have their own advantages and drawbacks. Saline implants require a smaller incision to insert, since implants are filled with the saline solution after they are place in the breast. Silicone implants do not carry the risk of rupturing, like their saline counterparts. The choice of silicone or saline implants is a personal one that should be made between a patient and her doctor.

While there was no word on the type of implants she had for the procedure, there is little doubt that Stodden and her immediate circle are happy with her choice. She was quoted at E! Online as saying, “My results are looking incredible and very sexy.”

Stodden said her decision to have breast augmentation surgery was made because of her desire to have more natural curves. The aspiring singer and model said she often wore push-up bras to enhance her cleavage, but she wanted to be able to enjoy that look without the need for the specialty undergarments.

Stodden’s mother, Krista Stodden, said her daughter came forward about her procedure because she wanted to be honest about her choice and her reasons for making it. With Stodden’s results now on display for all her fans to see, it is likely her decision to undergo cosmetic surgery will inspire others to consider plastic surgery procedures as well.

If you are interested in learning more about breast augmentation procedures, our team can help. contact one of our representatives to get more information or to be linked to a qualified cosmetic surgeon in your area today.