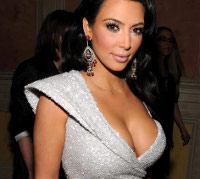 Kim Kardashian has defined herself as the It Girl of the early millennial years, and her buxom body seems to just get better with age. While she has admitted to using Botox and recently dragged superstar boyfriend Kanye West to her laser hair removal treatments, Kim remains coy about her forays into cosmetic surgery. Dozens of plastic surgeons have compared photos of younger Kardashian to her current figure and come to the conclusion that she’s been surgically enhanced. From butt implants to rhinoplasty, here are the top procedures experts suspect she’s undergone along with the average cost a similar treatment might set you back! 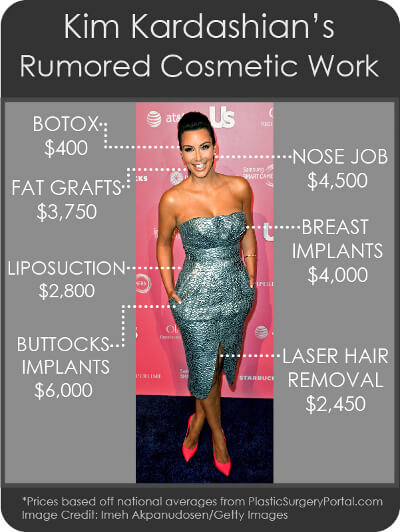 Rhinoplasty – Comparing photos of Miss Kardashian from 2006 to those in 2009, it was clear to Los Angeles plastic surgeon Dr. Jeffrey Rawnsley that she got a nose job. In an article titled, “Kim Kardashian’s Nose Job: a Forensic Analysis,” posted on his practice’s website, Rawnsley breaks down the evidence and states, “It is a subtle change, but does all the wonderful things that finesse rhinoplasty can do.” Modern rhinoplasty techniques allow surgeons to operate from within the nostrils, making the popular procedure essentially non-scarring.

Botox – During a Nightline interview in 2010 Kim Kardashian admitted to trying Botox and featured the treatment in an episode of Keeping Up with the Kardashians. After noticing faint bruises following her injections on the reality show she swore off Botox till she reached 40-years-old, but Kim later blogged about the experience: "On the show you saw I had some bruising around my eyes after the procedure, which is totally natural, but because I hadn't looked into the side effects, I freaked out." Many believe she’s since resumed treatments as Miss Kardashian shows no signs of wrinkling around her brow, mouth, or anywhere at all really, at the age of 31.

Fat Transfer – Comparing Kim’s face from 2006 to its present form, many cosmetic specialists note that her cheeks look sculpted. While this may be the result of effective dermal fillers like Restylane or Juvederm, a more natural and long-lasting fat transfer could be the source. Commenting on Kim’s immaculately-formed visage NYC surgeon Dr. Jennifer Walden told Hollywood Life, “When stars start using injectables in multiple areas of their faces, it smoothes everything out, so it looks nearly flawless.” Fat transfers can take as little as an hour to perform and offer near permanent results.

Breast Implants – Like everything else about Kim’s body, her breasts are a little too perfect, leading to plenty of rumors that she opted to bump her bust from C’s to double D’s. To determine whether Miss Kardashian really did experience a bosom boost, Jezebel.com consulted Los Angeles surgeon Dr. Anthony Youn. "[Her] breasts appear overly round and full for her thin figure,” stated Youn. “This ‘roundness' is a likely sign of breast implants." Today’s cosmetic market offers all sorts of breast augmentation options from traditional silicone implants to the “lunchtime boob job” via Macrolane injections.

Butt Implants – The most commented upon asset of Kim Kardashian’s anatomy is her impossibly round derriere. Her signature bubble-butt has gathered compliments from perplexed members of the entertainment media ever since its sudden growth in the mid 2000’s. Though she has publicly denied it, even going so far as to release X-rays of her behind, many experts suspect her perfect posterior is the result of buttocks implants, fat injections, or the Brazilian butt-lift procedure gaining popularity in cosmetic clinics across the nation.

Liposuction – Consistently stunning bikini photos and Khloe Kardashian’s claim that her sister “eats nothing but junk food” has fueled speculation that Kim has gotten a liposuction or liposculpting treatments (such as VelaShape). Many of the rumors center around her past-relationship with record label exec Damon Thomas when she was only 19, but others suspect she periodically treats herself to the fat removal treatment. Liposuction is a simple but invasive procedure that can remove upwards of 30% of fatty tissue in under an hour.

Laser Hair Removal – Kim Kardashian is proud of her Armenian heritage but isn’t so fond of the dark body hair that comes with it. During a recent appearance on Oprah’s Next Chapter she discussed her laser hair removal treatments, blithely admitting, "I've lasered everything." After she completes the full package of laser hair removal, typically around eight sessions for full results, Kim will never have to worry about unflattering body hair again, as laser hair removal provides a permanent hair reduction on all treated areas.

Only time will tell if Kim will ever reveal the secrets to her inexhaustible good looks, but if you’re interested in any of the above cosmetic treatments, Plastic Surgery Portal can help. Our representatives can book you private consultations with any of the esteemed plastic surgeons in our nationwide network, so contact us today!