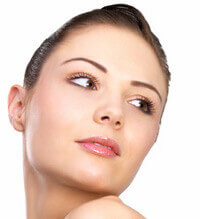 It appears that having a beautiful chin is more important than ever. New statistics released by the American Society of Plastic Surgeons (ASPS) reveal that chin augmentation surgery is the fastest-growing plastic surgery procedure in the country, outrunning even industry standards like Botox® and breast augmentation. The trend is steady across all demographics—young and old, men and women. Many experts are attributing the chin surgery surge to technological developments like Skype, FaceTime, and other video chatting applications.

Chin implants give the lower half of the face a stronger, more balanced appearance. And like so many other desirable body parts that seek plastic surgery for, getting the chin of your dreams isn’t something that can be developed over time. "Having a strong chin is not something you can gain via diet or exercise," said Dr. Darrick Antell, a Manhattan plastic surgeon. "You're either born with it or you see a surgeon to improve it."

The appearance of the chin is also closely associated with youth—so chin augmentation can fall into the same rejuvenation category as a facelift or eyelid surgery. The age group of people between 40 and 54 years old saw the biggest chin implant jump with a 77% rise. ASPS President Dr. Malcom Z. Roth says that frequent video chatting can help make aging chins more noticeable. “As more people see themselves on video chat technology, they may notice that their jawline is not as sharp as they want it to be. Chin implants can make a dramatic difference."

It’s not just the older set that are dissatisfied with their jaw lines. "I'm seeing younger people coming in who don't like the shape of their face," says Michigan plastic surgeon Dr. Tony Youn. "I think it has to do with applications like FaceTime, which is like Skype for iPhones. I do FaceTime with my wife and kid and I'm shocked at how bad I look on that. I think these [applications] are causing people to see cosmetic imperfections they may not have noticed before."

Many chin implant patients are people that have utilized video chatting technology not only for personal communication, but also at work. While video conference calls cut down on travel expenses, they also highlight a weak chin. Lizette Stephens noticed her lackluster chin at the workplace. "I do a lot of video chats and I'm in a lot of photos and noticed that my double chin was very pronounced. It really, really bothered me. I wanted to do something about it to get a more profound profile and more definition in my chin area," said Stephens.

When it comes to turning to plastic surgery to enhance your career, Stephens isn’t alone. "We know that CEOs tend to be tall, attractive, good-looking people,” said Dr. Darrick Antell. “We now know that these people also tend to have a stronger chin. As a result, people subconsciously associate a stronger chin with more authority, self-confidence and trustworthiness."

It’s easy to agree with Dr. Antell. Think about President Obama’s chiseled chin, Bill Clinton’s eye-drawing jaw, and Hillary Clinton’s broad jowls. But Dr. Antell isn’t speaking generally: After studying CEOs of the top Fortune 500 companies in 2007, he determined that 90 percent of the big wigs had chins more prominent than that of the average person.

Interested in changing up your chin? Browse our network of board-certified plastic surgeons in your area to schedule a consultation.