Celebrity Weight Loss: The Good, the Bad, & The Healthy 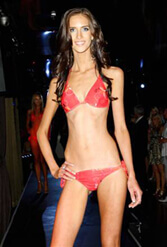 After the Australian finals preceding this year's Miss Universe competition, pictures of one Australian contestant in particular, Stephanie Naumoska, were spread online; the public's overwhelming reaction to the photos was one of shock and outrage rather than of admiration. In the pictures, we see Stephanie Naumoska posing for the competition's swimsuit segment—a leggy teen girl with a radiant smile, and a very emaciated frame beneath that tiny red bikini.

These pictures, combined with recent celebrity news feed images of a stick-like Lindsay Lohan, made some wonder if the too-skinny trend is back in Hollywood. Are we seeing a resurgence of ultra-thin, Twiggy-esque celebrities? And what is a healthy, effective alternative to celebrity fad dieting, if we want to maintain our trim figure the right way? Exceedingly popular medical weight loss programs could be the answer.

Miss Universe Australia's Miss Naumoska, a 19-year-old model from Sydney, is reportedly 5'11" and weighs 108 pounds; these measurements give her a BMI of around 15, which is drastically below the cut-off of 18 that separates healthy BMI's from underweight ones. The pageant was criticized and local dieticians and health professionals spoke out against the negative body image message this was sending to young women.

At around the same time, we were seeing picture after picture of Lindsay Lohan, post-breakup from ex-girlfriend Samantha Ronson, barely filling out her teeny two-piece, or getting lost in her flimsy tank dress. But model Stephanie Naumoska and actress Lindsay Lohan are hardly the only body-fat deprived ladies in the limelight at present.

Other celebs that are continually being targeted as the source of eating disorder rumors and for their too-skinny silhouettes include Victoria "Posh" Beckham, Kate Bosworth, Keira Knightley, Mischa Barton and Lara Flynn Boyle. Even celebrity sweethearts like Nicole Kidman, Katie Holmes and Kate Hudson have been under scrutiny for being too skinny...and that's not even counting famed yo-yo dieters like Renee Zellweger, who are known to bounce back and forth between excess and extremely skinny.

The How's and Why's of Hollywood Weight Loss

Celebrity excuses for being underweight are almost as numerous as the unhealthy methods they use to drop the pounds. Whether it's "in preparation for a movie role," because of their "hectic schedule," or covered by the assertion that they're "just naturally skinny," celebrities usually drop pounds through unhealthy and potentially harmful means.

There are many celebrities that work out frequently, eat right and bam!—they sport amazingly toned, incredible bodies as a result. This is certainly the case for starlets like Jessica Biel and Madonna. But there are other celebrities that are so itty bitty it's just unrealistic to believe that they're naturally built that way. A few of the real and dirty dieting secrets of emaciated starlets include drug use, anorexia, fad or cleanse diets, etc. In other words, many of the celebrities listed in the tabloids' "too-skinny celebs" features just plain aren't taking care of themselves.

And let's not forget, celeb-body admirers, photo cropping and retouching is so standard in the industry that the reality of many celebrities' figures can't be counted upon unless you're standing right next to them (exhibit: Kim Kardashian's cellulite adventures). So what is a long-term method of weight loss that is healthy and can get you a bod on par with Jessica Biel's? Or at least close to it? While enough can't be said for the benefits of traditional diet and exercise, this occasionally isn't enough for people who need extra help losing weight and keeping it off.

Is Medical Weight Loss the Answer For Me?

Medical weight loss programs are usually designed by a combination of licensed bariatric doctors, nutritionists, physical trainers and even behavioral therapists. By working with this team of medical and heath care specialists, patients can start to identify problems in their eating habits, workout routines, ways of thinking, and lifestyle choices that will continue to keep them from reaching their goal weight.

By having weight loss professionals monitor patients' progress and recommend appropriate alterations or modifications to their routine, patients will be able to achieve safer weight loss. Professional advice and insight with medical weight loss minimizes the chances of causing unnecessary stress or harm to patients' bodies. The best part about the program is that, since its weight loss methods are all achieved naturally, it can help patients maintain their healthy goal weight for life.

Cosmetic Surgery for Slimming Down?

For individuals who've been battling weight problems for years and have tried everything out there, medical weight loss might be combined with a surgical alternative to achieve the desired results. Medical weight loss professionals may recommend gastric bypass surgery or Lap Band surgery for patients with more severe obesity problems.

Patients who are within reach of their ideal weight, but who have extra pounds and inches that just won't go away, body contouring surgery procedures like standard or mini tummy tucks, liposuction and thighplasty surgery are effective ways of achieving success where traditional methods have failed.

Just remember, cosmetic surgery procedures are not to be used for the sole purpose of weight loss. Mini tummy tucks and liposuction surgery are just recommended for removing the excess tissue that weight loss couldn't get rid of.

If you'd like to learn more about medical weight loss, or about cosmetic surgery procedures, it's best to go through a licensed and certified weight loss specialist, or a qualified cosmetic surgeon who performs body contouring surgery.

But no matter what weight loss or body contouring process you decide on, remember: being healthy is beautiful! Starvation and self-abuse, not so much.