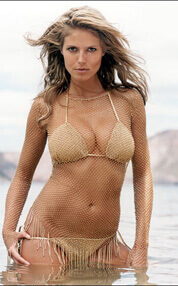 It’s normal for women to gain weight during pregnancy, and even more common for them to want to lose it right after giving birth. While it may take some time to drop the baby weight, many celebrities are doing it a record speeds, hitting runways, red carpets and beaches mere weeks after childbirth. So who are the women really turning heads with their post-baby bodies. Here is a list of the best celebrity bodies post-baby.

Heidi Klum: After giving birth to four children, Heidi Klum has certainly maintained her model physique. Only a month after giving birth to her daughter, Lou Sulola, in October 2009, Klum hosted the Victoria Secret Fashion Show and even made an appearance on the runway. She had done the same thing four years earlier after giving birth to son Henry in September 2005, only that time she had two months to get ready to strut her stuff in barely-there lingerie. Klum credits her post-baby body to healthy eating and lots of exercise. Whatever she’s doing, it’s working.

Kate Hudson:After putting on nearly 60 pounds during her pregnancy in 2008, Kate Hudson managed to drop all of it within four months of giving birth. A diet of lean proteins and fruits and vegetables combined with strict cardio sessions and resistance training helped Hudson not only lose the weight, but gain a killer stomach to go with it.

Jessica Alba: By sticking with a relatively easy workout routine during her pregnancy, Jessica Alba was better able to shed the pounds once she gave birth. She gained 35 pounds, and it took her only two months to drop the weight. With the help of a healthy diet and hour-long workout sessions five to six times a week, Alba was able to show off her toned, post-baby body on the red carpet within a few weeks.

Gwen Stefani: This pop music icon has always been admired for her amazing singing voice and rock-hard abs. After becoming pregnant with her first child and giving birth in 2006, it was unknown whether she would be able to return to her amazing physique. Through intense resistance training, Stefani managed to lose the weight and regain her muscular body. Looking at photos of the singer/songwriter, it’s impossible to tell she had a baby, let alone two!

Milla Jovovich: The Resident Evil star and former model jumped up to a startling 192 pounds during pregnancy thanks to her diet of peanut-butter-and-jelly bagel sandwiches. So how did she end up losing over 62 pounds in five months? Jovovich relied on five workouts a week with her trainer, as well as a regimented diet plan where meals were actually sent to her house. By maintaining this routine, Jovovich was able to return to her pre-baby state, and is happy to show it off.

Denise Richards:After giving birth to her daughter Lola in June of 2005, Denise Richards began working out again as soon as she got the go-ahead from her doctor. Through training sessions and specially tailored meals, Richards dropped the weight easily within a couple months. Although she was not completely happy with her post-baby body, and did consider plastic surgery to alter her breasts. Whether or not she underwent any mommy-makeover procedures is uncertain, but she certainly wasn’t opposed to the idea.

Angelina Jolie: Giving birth to twins would severely alter any woman’s body, but Angelina Jolie adapted quite well after delivering her twins. In fact, her post-baby body caused some people to question whether or not she had a tummy tuck, or what some like to call a mommy tuck. While sources on that subject are unreliable, it seems Jolie’s routine of eating healthy and staying active is working well for her.

Dayna Devon: The Extra host gained 24 pounds during both of her pregnancies. Afterwards, Dayna Devon dropped the excess weight, but not the loose, sagging skin around her midsection. In an effort to regain her pre-baby look, Devon opted to have a mommy makeover, and received a tummy tuck which shaved two inches off her waist.

Brooke Burke: As a former model and contestant on Dancing With the Stars, Brooke Burke knows the importance of a lean physique. After giving birth to four children, Burke got back to her old body relatively fast with the help of dance practice for the show, three weekly pilates classes and four-mile hikes. She also used a nifty device called a Taut, which is an elastic compression garment that wraps around your midsection, supporting baggy skin and engaging your core.

Gwyneth Paltrow: After giving birth to her daughter, Apple, Gwyneth Paltrow easily dropped the weight. After her second pregnancy, weightloss didn’t come as easy. She acknowledged that when you’re in your thirties, even genetics will start to fail you. With that in mind, Paltrow went to work, avoiding huge dinners late at night and working out with a trainer six days a week. Though the fat was stubborn, she still managed to lose the weight in relatively short period of time.

Most new mommies do not have the benefits of celebrity trainers, personalized meal plans or endless amounts of free time to help work off the pounds. However, the majority of non-celebrity moms don’t have movie premieres to attend or thousands of photographers around snapping their picture. Celebrities have a certain image to uphold, and therefore, rapid weightloss after a pregnancy is necessary for their careers. The average woman can regain her pre-baby look by eating healthy and exercising, it just might take a little longer.

If you are struggling with baby weight and post-pregnancy changes, just remember that even celebrities have relied on a little extra help to get their old bodies back. Mommy makeovers are a growing trend in the plastic surgery world, and many women are turning to these treatments after childbirth. If you are interested in learning more about mommy makeovers, or you would like to locate a certified plastic surgeon, contact us today. We’ll set you up with an initial consultation with a trained doctor, and get you on your way to an amazing post-baby body.