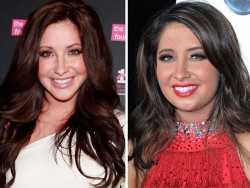 Bristol Palin recently admitted that she's “thrilled” with the new look her jaw surgery has given her. But wait-- “It's not plastic surgery,” she told Us Weekly.

After showing up at recent events like the Candie's 2011 benefit gala in New York City on May 10, it became obvious that the 20-year old daughter of Sarah Palin was sporting a slimmer, more defined, and decidedly more attractive face. As soon as the buzz began, the Dancing With The Stars alum admitted that she had indeed had some work done.

Bristol told Us Weekly that she underwent the surgery in December 2010 for corrective reasons, meaning that it was performed in order to correct a medical, rather than cosmetic, condition. “I had corrective jaw surgery,” Bristol said. “It improved the way I look, but this surgery was necessary for medical reasons…so my jaw and teeth could properly realign... I don’t obsess over my face.”

The younger Palin, who is mother to two-year old Tripp, was previously known for her cute facial features. Her chin was rounded and soft, making her overall face look wide and youthful. Now, Bristol's face is thinner and elongated. Bristol said that even though the surgery wasn't aimed to make her look better, she couldn't be happier with her new look.

“I am absolutely thrilled with the results,” she said of her jaw surgery. “I look older, more mature, and don’t have as much of a chubby little baby face!”

Bristol could be lying-- it's hard to say. Jaw correction surgery is not uncommon for medical reasons. It can make more room in a small jaw for teeth, correct an asymmetrical jaw, or as Bristol claimed, it can just help the teeth realign. But would the medical surgery really result in a dramatically more attractive jaw? Would it turn a rounded, soft jawline into one that's perfectly chiseled and suits her face? That's debatable. If Bristol really did get jaw surgery for corrective reasons, she probably had some cosmetic work done at the same time.

Covering up plastic surgery with the guise of “corrective surgery” is a pretty standard trick in the Hollywood book. It's like when Ashley Tisdale claimed her new perky nose was the result of surgery to correct a deviated septum, or when Courtney Love said her lip injections were somehow corrective (not sure how that one works). Chances are, Bristol doesn't want to admit that she just wanted to improve her look by opting for cosmetic jaw surgery.

Jaw surgery sent Bristol Palin from baby-faced to beautiful. If you're interested in jaw surgery, a jaw implant, or chin augmentation, we can schedule a private consultation with a board-certified plastic surgeon. The two of you can discuss how jaw surgery can enhance your looks and provide you with the self-confidence you deserve. Contact us today!