Black Market Injections and More: Botched is Back 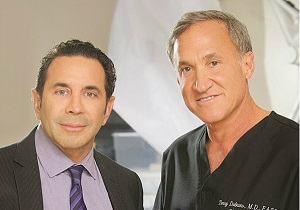 It is human nature to want to look at tragedy, but when it comes to the reality show Botched, E! network will have the attention of millions who will tune into some disfiguring plastic surgery nightmares.

Returning for its second season in April, the real life nip-and-tuck show is back with even more unsettling figures. According to an In Touch article, the show that features doctors Terry Dubrow and Paul Nassif, who are cosmetic surgery specialist, will show some of the “most extreme cases of botched cosmetic surgery ever seen on television.”

“From black market injections to multiple gender reassignment, this season is set to be even more startling than the last,” reports In Touch.

According to the reality show’s website, the upcoming season reunites first season stars, including the 34-year-old Justin Jedlica, also known as The Human Ken Doll.

“The dynamic duo transform patients whose past procedures went terrible, and work their magic to make them feel beautiful again,” reports the website, adding, “You may be thinking, who can top the Human Ken Doll, the uniboob and so many more of the fascinating patients from season one.”

Hinting that Jordan James Parke, Baywatch actress Nicole Eggert and Mo’ Thugs’ Guillermo Eiland, “who reportedly spent around $150,000 to look like Kim Kardashian, will be three of the many mind-blowing patients on season two,” the show’s website takes no prisoners in revealing the some of the second season’s biggest moments. One instance is when a once difficult patient pulls a prank on one of the plastic surgeons.

“Dr. Nassif is quick to point out her nose ring, and is annoyed that she pierced it after all the work that was put into correcting her nose. But she immediately removes it and says, ‘I just messed with you!’ She totally succeeded in her prank,” reported the website.

One thing about plastic and synthetic beauty procedures is they are just that, fake. Injecting foreign substances in the body is bound to backfire once in awhile, with many woman victim to botched plastic surgeries. A recent Signature Forum report revealed the botched lip implant MTV’s Teen Mom star Farrah Abraham suffered. According to the American Academy of Facial Plastic and Reconstructive Surgery (AAFPRS), “wanna-be celebrity plastic surgery is on the rise.”

Further reporting that “13 percent of facial plastic surgeons surveyed saw an increase in requests for celebrity procedures in 2014, up from 3 percent in 2013 and 7 percent in 2012,” the AAFPRS stats prove how many want to literally look like the celebrities. To see doctors make right what went wrong, make sure to tune into Botched April 14, at 9 p.m. on E!.