An Asian-American's Perspective on the Eyelid Surgery Trend 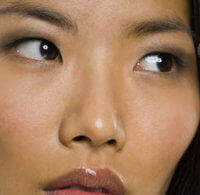 Eyelid surgery, or blepharoplasty, is one of the most popular plastic surgery procedures in the United States. According to the American Society of Aesthetic Plastic Surgery, blepharoplasty ranked number three for 2010’s top procedures, right after breast augmentation and liposuction. In addition to being common, blepharoplasty is arguably one of the least controversial plastic surgery procedures on the market: it’s designed to reduce lower eyelid puffiness, upper eyelid sagging, and often give the patient a more youthful appearance. It’s moralistically no-frills, especially when compared to overblown collagen lips, Botox parties, or aggressive liposuction in place of the patience of a fitness routine. Blepharoplasty to the American public eye seems, well, agreeable.

And it’s perfectly agreeable across the Atlantic as well. But to give you a more accurate vision of blepharoplasty in Asia, it’s comparable to breast augmentation in the United States: it’s by far the most popular plastic surgery procedure, and it’s so desirable to the masses that it doesn’t acquire much in the way of controversy. But it’s notable that the extremely popular Asian blepharoplasty serves a different purpose than Western blepharoplasty. Asian blepharoplasty is characterized by the creation of an epicanthic fold, or double eyelids. Most East Asians are born with monolids, or no crease in their eyelids. The lack of a crease has been described by plastic surgeons as an “extreme Asian feature,” meaning that it is easily identifiable trait among Asians. There’s no question that to much of East Asia, double eyelids are a symbol of beauty. They’re uncommon, and make the eyes appear larger—something coveted by many East Asian cultures. Asian blepharoplasty makes this beauty ideal accessible.

A Personal Perspective on the Controversy

As a person of mixed Asian and Caucasian descent who works in the beauty biz, I feel a degree of closeness to the subject despite having double eyelids myself. For a brief period during high school I attended an international school in Bangkok, abound with both the mono and bi-lidded. But even eyelids didn’t keep us from having to participate in the dreaded swimming unit in gym class. After the showers, I recall girls clamoring over their hair and makeup in front of the locker room mirrors. I was embarrassed to have my stash of unnatural gadgets: a garish eyelash curler, liquid liner, contouring powder. But compared to one group of Japanese girls, my makeup bag was modest. The girls carried small kits with glue, tape, and tiny spatulas that they used to semi-permanently give themselves the desirable epicanthic fold—a captivating thing to watch. I began noticing the kits, which ranged from tacky to luxurious, in everywhere from Boots Cosmetics to airport vending machines. My best friend—who is Cambodian— once fondly described the time she had her eyelids taped for a wedding, and afterwards “wanted to buy a pack of them immediately.”

The always insightful Tyra Banks ran a segment on Asian blepharoplasty in 2008, in which she interviewed an Asian American who had gotten the procedure. The lovely (both pre and post-surgery) woman said that she had gotten the surgery because she felt it would give her eyes a lift, and simply make her eyes more beautiful. Tyra told the woman that she was being dishonest, because an earlier Tyra probe had revealed that the woman had also been teased for her ethnic look at her largely Caucasian school and neighborhood.

Tyra’s not the only one to deem Asian blepharoplasty a European-fueled beauty standard. David Mura, a Japanese American author, elaborated on the possible fuel for Asian blepharoplasty. "People grow up watching the media, which is where people are beautiful and powerful. You see very few Asian faces. The message is: the way you look is not beautiful, or doesn't count, or doesn't even exist," he said. "The power of the American media and American culture stretches all over the globe, and can cause people to devalue their own culture.”

The Role of Ethnocentrism in the "Westernization" Argument

If Asian blepharoplasty surgery is Westernization to them, then their assessment of the procedure is giving American beauty too much power. I simply don’t believe that creating eyelid folds is an inherently anti-Asian procedure, as some believe it to be. It may soften an ethnic feature and may even cause these patients to look more Caucasian than before, but the drive behind getting this form of plastic surgery is not a partially or wholly Western aesthetic. Quite simply, the reason Asian blepharoplasty is so popular is because Asian culture (like many other cultures) finds larger eyes more beautiful—and it has little to nothing to do with the influence of westernization. The beauty of America’s melting pot nature is that the beauty products and trends initially created for one race often sneaks into mainstream American culture. It’s unlikely that a Caucasian tanning bed enthusiast will tell you that he or she would rather be Hispanic or that an African American woman with a weave is denying the beauty of African women. Asian countries don’t have the wide range of skin colors, hair types, and ethnic features that America has. As the cosmetic industry develops, they are bound to have cosmetic practices that aren’t inherently Asian.

If you're interested in learning more about the real risks and benefits of blepharoplasty or any other plastic surgery procedure, contact our representatives at Plastic Surgery Portal today. We’ll gladly schedule you a private consultation with a board-certified plastic surgeon in your area.