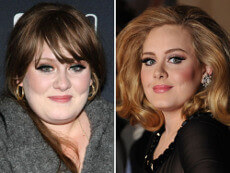 Grammy-winning songstress Adele is best known for her heartfelt tunes about failed relationships. Adele’s plus size is often a topic of conversation not far behind, given that the singer’s size 16 frame is far from the Hollywood norm. But lately, fans and media have been discussing another aspect of Adele’s look: her nose. Side-by-side photographs show that Adele’s nose tip is looking thinner and more refined than before. Did Adele really get a nose job?

Adele’s nose was never a big deal. It was never a media spectacle and it was never her defining feature—in fact, it was overall quite thin. Her bridge is straight and narrow, which many people consider ideal. The tip of her nose was a bit bulbous in comparison to the rest of her features, but it would be silly to say that Adele’s nose was distractingly large or disproportionate. And despite the negativity regarding her weight, the media has generally regarded her face as quite beautiful. She had even gotten infamous ice queen Anna Wintour’s approval, as Adele graced the cover of Vogue in February 2012. Her nose couldn’t have been that bad. But it looks as though Adele may have been dissatisfied by her natural nose, as it is looking rather different. Adele’s new nose tip looks thinner and less fleshy. It’s a subtle change, but it compliments her face well.

“The tip of Adele’s nose is definitely more defined, which would suggest that she had a tip rhinoplasty,” said Beverly Hills Plastic surgeon Renato Calabria. “That consists of reshaping the lower cartilages of the nose by reducing their width and repositioning them with carefully placed sutures to give more definition. This can all be done trough a tiny incision at the base of the nose in a minimally invasive fashion to limit swelling and bruising.”

If Adele indeed seek surgical expertise to change her nose, she certainly isn’t the first Hollywood star to do so. Rhinoplasties continuously top the list of most popular plastic surgery procedures, thanks to the procedure’s ability to improve the overall look of the face. And since rhinoplasty is so popular, many plastic surgeons specialize in the procedure.

Rhinoplasty is most commonly performed under general anesthesia, allowing the patient to be asleep throughout the procedure. From that point on, the next steps of rhinoplasty depend on the patient’s needs. While Adele’s rhinoplasty was minimal, noses in need of more work will require a more invasive procedure. Rhinoplasty can narrow wide nose bridges, shave off bumps, straighten crooked noses, add a stronger bridge, and much more. The recovery period after a rhinoplasty may include wearing a splint for a few days, as well as bruising and swelling for the first couple of weeks. The final results of a nose job can be seen in about three months to a year. If surgery doesn’t appeal to you, some people’s aesthetic desires can be fulfilled with a non-surgical injection rhinoplasty.

Rhinoplasty is a common procedure that can change your life. If you’re interested in changing the look of your nose, the first step is to speak with an expert plastic surgeon. Our network of board-certified plastic surgeons includes only reputable doctors from all over the country. Contact our representatives now to schedule a personal consultation with a plastic surgeon in your area.