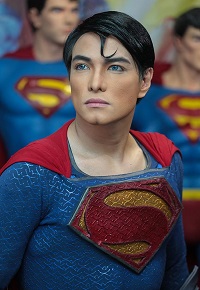 Plastic surgery is an incredibly versatile and effective way for people to alter their appearance, allowing them to feel comfortable in their own skin. However, there are occasionally cases of people taking their cosmetic enhancement to an extreme level. The goal for these people isn’t to subtly enhance their natural appearance, but rather to fully mimic the look of a famous personality or to create a striking, unrealistic visage. Here are six of the most bizarre and intense plastic surgery transformations.

Superman is one of the most beloved, well-known superheroes ever created, and Herbert Chavez, a man from the Philippines has taken his love of this American icon to the extreme. After 18 years and 23 plastic surgeries, Chavez has attained the chiseled features the Man of Steel, and he even sports the superhero’s signature spit curl.

Sometimes people use animated characters as their source of inspiration. Such is the case with Cassandra Cass, a transgender woman who has reportedly spent upwards of $200,000 to look like Jessica Rabbit, the bombshell cartoon wife of the title character in the classic “Who Framed Roger Rabbit?”

Barbie has been an icon since her introduction nearly 60 years ago, and many women have tried to copy her signature look. Ukranian celebrity Valeria Lukyanova, however, is incredibly literal with her approach, which in addition to breast implants also includes contact lenses and makeup in order to look like a plastic doll.

You can’t have Barbie without Ken, which is a notion that Justin Jedlica would probably agree with. Known as the Human Ken Doll, this 35-year-old American man is said to have undergone more than 190 cosmetic procedures in order to look like Barbie’s well-known husband.

Not everybody tries to replicate the appearance of a positive role model. A Venezuelan man named Henry Damon has received a skull implant, had his nostrils removed and endured a striking red face tattoo in order to look like the Red Skull, the nemesis of Captain America.

Even if you don’t recognize the name, you probably remember the story. Tobias Strebel was a man in his 30s who spent more than $100,000 on liposuction, fat injections, lip lifts and hair transplants in order to look like Justin Bieber. Sadly, Strebel died shortly after he achieved his goal of looking like the celebrity pop star.

While these stories may seem odd and extreme, they do fall in line with the generally accepted goal of cosmetic enhancement. At its core, plastic surgery should allow people to be happy with their appearance, and there’s no denying that all of the people in these stories have put in a great deal of time, effort and money in pursuit of that goal.