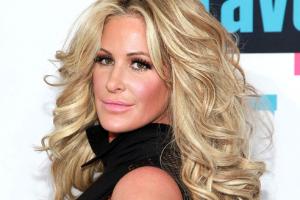 In 2008, Kim Zolciak burst onto our television screens as one of the feisty stars of Bravo’s The Real Housewives of Atlanta. Subsequently, the network granted Zolciak her own spin-off show, Don’t Be Tardy, documenting her life with husband Kroy Biermann. While Zolciak has been in the public eye for the better part of a decade now, observers have noticed that the 37-year-old reality star hasn’t noticeably aged during that time. Recently, Kim Zolciak posted a picture of herself from 14 years ago, giving eagle-eyed observers an opportunity to speculate on the various plastic surgeries that she has undergone in order to maintain her youthful appearance.

Compared to the picture of her younger self, Zolciak has noticeably fuller lips. Given the popularity of lip fillers, it wouldn’t be surprising if she was using injectables such as Restylane in order to maintain the fullness and puffiness of her lips.

In the past, Zolciak has admitted to receiving Botox injections. Botox would not only explain the noticeable lack of wrinkles on her face, but it could also explain the shape of her eyebrows. In the last decade and a half, Zolciak’s eyebrows have taken on a more lifted appearance, which can be the result of Botox.

One of the biggest problems for women as they age is that their faces start to lose fullness, making them look older. For Zolciak, this loss of fullness hasn’t been a problem, leading observers to speculate that she has been getting injectable fillers to maintain the healthy plumpness of her face.

Perhaps the greatest difference in Zolciak’s appearance between then and now occurs in her nose. Nowadays, Zolciak’s nose is much narrower than it was in years past, particularly at the tip. Additionally, the bridge of the nose appears much smoother and straighter, especially when viewed from the side.

No speculation is needed for this one. In the past, Zolciak has openly praised her boob job, even posting pictures to Instagram to show off her new look. According to Zolciak, not only did she recently get new lighter silicone implants to replace her older saline ones, but she also had her nipples moved up slightly, giving her breasts a more lifted appearance.

All in, observers speculate that Zolciak has spent more than $15,000 on plastic surgery. But with the popularity of cosmetic enhancement growing, Zolciak’s plastic surgery journey isn’t all that uncommon nowadays. As the practice continues to become more popular, these procedures will become more commonplace for women all across the country.