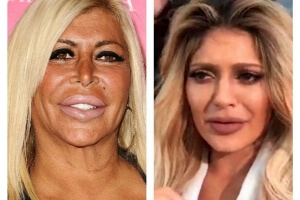 When you are a mob wife and niece of Italian made man Salvatore Genevose, there is really little anything one can say about you without fearing for their life.

But that is not the case with Angela Raiola, also known as Big Ang on the reality series Mob Wives. The Staten Island native loves the attention and gets plenty of it as the most talked about star on the hit show. The subject matter that almost always up when it comes to Big Ang is her drastically different look from back in the day until now.

“There is no denying she has had multiple cosmetic procedures to enhance her already authentic Italian nature,” reports Wetpaint. “From the looks of her off-the-shoulders dress and the permed ‘do, this photo was probably taken in the ‘80s or early ‘90s. Back then, Big Ang was rocking a more au naturel look, and her lips and chest are noticeably smaller.”

To top off the plastic surgery gossip, a recent social media photo of a certain Kardashian clan member has sparked up a conversation that the two resemble one another. “Fans are freaking out over Kylie Jenner’s latest Snapchat videos—as she bares a striking resemblance to the 55-year-old reality star, Big Ang,” reports InTouch Weekly.

Though the gossip magazine usually stretches the truth, the statement is actually quite accurate about the 18-year-old’s recent Elle Canada photo shoot pictures. Also pointing out the similarities, Hollywood Life reports an exclusive interview with a close source to Jenner. According to the young starlet’s friend, she is horrified at the comparison.

“She’s always changing her appearance and her style to find one that she loves and is most comfortable with,” said the source. “She was very shocked, hurt and literally crushed to hear that people are comparing her to Big Ang.” The magazine notes how “while she’s used to being compared to Kim Kardashain, 34,” the recent photo shoot had fans venting on Twitter, saying “that the Tyga’s girl looked more like the famous Mob Wives star than she did her big sister.”

There is quite a big difference in being compared to her sister and Big Ang. “She likes Big Ang, nothing against her, but she’s offended that some people say she looks like a 53-year-old woman at the age of 18,” said the source, adding Jenner can withstand backlash from someone like Blac Chyna, but finds it hard to not take her fan’s comments to heart. “It’s not easy being a normal teenager, let alone one growing up in the glare of reality TV and social media. Haters need to leave Kylie alone.”

As for as how Big Ang feels about the comparison, there are no reports revealing the reality star’s reaction, but suffice to say being compared to a beautiful teenager 35 years your youth is a compliment always welcome.