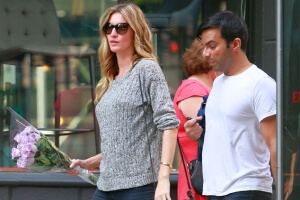 As the quintessential Angel model for Victoria's Secret, Gisele Bundchen may have crossed the line from all natural loveliness to plastic prettiness, according to recent reports.

A past Plastic Surgery Portal report detailed the Brazilian model’s alleged attempted secret visit to International Clinique du Park Monceau with her sister. However, it is not exactly clear if it actually was Bundchen, who buried herself under a black burqa. Though the traditional Muslim wear left no actual sign it was the supermodel, her long-time chauffeur drove her to the appointment and when getting out she seen wearing sandals, clearly not the permitted footwear for an Indian woman.

Her alleged visit came directly after her April 2015 Brazil Vogue cover that featured Bundchen completely naked. And by the looks of the black-and-white photo, the last thing she needed was surgery. Describing the photo shoot of the supermodel’s 20th anniversary and retirement from the catwalk, Us Weekly highlighted how she “flashes the side of her breast in the arched position,” while holding a large letter G and number 20.

According to the supermodel, it is her perfect body in question that led her to leaving the catwalk behind. "Automatically my body tells me if what I do is worth it, and it asked to stop. I respect my body, it's a privilege to be able to stop," said Bundchen.

What has spurred cynicism towards Brady’s beautiful wife is that she publically spoken against plastic procedures, thus making her a straight up hypocrite in trying to hide her change of heart and chest size. Since her visit, E! reports the “Brazilian beauty was spotted strolling the streets of the Big Apple with her pal and hairstylist Harry Josh, wearing a baggy sweater and skinny jeans that perfectly highlighted her enviable legs.”

“And based on her model-off-duty look, it's hard to tell what—if anything—appears to be different about the 35-year-old stunner,” E! added. Also an actress and producer, her official website, which requires translation, shows a slew of sexy shots of Bundchen wearing her own line of intimate apparel. By the looks of it, her sculptured physique appears perfect, especially her breasts. But it is possible the underwire push-up bras she is modeling are the reason for her perky breasts that she still sports after having two children.