Did Kylie Jenner Get Her Curves from a Cream? 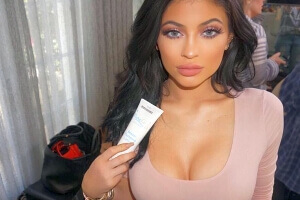 She finally admitted to plumping her lips with filler; however Kylie Jenner’s breasts and derriere are still in question, says Radar Online.

Starting the static herself by posting both her butt and cleavage on Instagram and claiming their perfection was based on a topical cream and not plastic surgery, the 18-year-old opened up a plastic surgery Pandora box.

Since claiming her extra curves are related to a cream, rather than plastic surgery, Jenner continues to slant her beauty naturally. Using Instagram as her backdrop, Jenner captioned a pic of herself holding a Pure Leef product. “Love sharing my beauty secrets with you guys and this is a favorite,” she writes adding, it’s made with “all natural ingredients (which is important to me) to help maintain & accentuate your curves!”

Continuing with the blatant promotion, Jenner finished the saying using the fat-stimulating cream “she started seeing results after only a month of consistent use.” According to Jenner, it’s Pure Breast Plumping Lotion and Butt Enhancement Cream that have added her extra curves and nothing else.

“According to Beverly Hills plastic surgeon Dr. Susan Evans, Jenner is stretching the truth. Dr. Evans tells Radar she believes that there is no crème in the world that would give Jenner those jaw-dropping results,” reports Radar Online, of the surgeon who has not treated Jenner."Based on the ingredients of Pure Leef, the amount that Kylie would need to use on her butt and boobs is not possible and potentially dangerous. She would need an IV! In conclusion, I would say that she has had breast implants and a fat transfer to her butt," added Evans.

A FOX news report cites a study that shows Jenner is not alone. “According to the American Society of Plastic Surgeons, nearly 18,000 teens ages 13-19 got a form of Botox in 2013. There seems to be even more pressure for young people to look perfect,” reports the media outlet, adding to achieve peek prettiness were photoshopping our best angles with colored filters to shade away all insecurities.

But when noticeable changes happen quickly, room for suspicion is inevitable, especially when it comes to the teenager who is noted for lying about her lips. “One of the most visible examples of this is Kylie Jenner who, at the age of 16, went from awkward but still very pretty teenager to an unrecognizable bombshell,” reports FOX, adding since she has confessed about lip fillers, “speculation is that her butt, breasts and nose have all been done as well.”

When and if Jenner ever admits to having a breast and butt augmentation is unknown, but the reasons for her alterations are quite obvious, according FOX. “Even before her father, Bruce Jenner, transitioned to Caitlyn, this was clearly a family that took their plastic surgery seriously,” according to the media outlet. “So it’s not a huge surprise that Kylie started so young.”