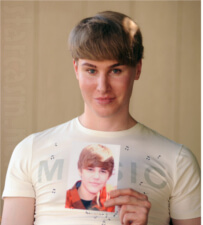 Fans of Justin Beiber have been to known to go to bizarre lengths to show their devotion to the still not yet 20-year-old pop music performer. Taking his allegiance to a whole new level, a 33-year-old man has spent almost 100,000 dollars over the past half decade to resemble Justin Beiber. Talk about a true Belieber.

Toby Sheldon, a songwriter, has spent his entire life savings on ongoing surgeries and procedures for the explicit purpose of providing him eyes and a smile like the pop celebrity Bieber. While this is not the first time anyone has used plastic and cosmetic surgery to resemble a famous celebrity, it is certainly one of the most extreme cases in recent years.

Feelings of social awkwardness and overall insecurity as a catalyst towards receiving plastic surgery is not limited to the United States (or Justin Beiber’s native Canada). For example, in South Korea, according to a recent survey, a staggering one in five women in Seoul has had some type of cosmetic surgery procedure.

What contributes to this growing trend in extreme plastic surgery? The pressure to conform to certain ideals is becoming a major global issue. The cultural emphasis is to maintain excellence intellectually as well as physically. For people struggling with self-identity, plastic surgery options avail personal insecurities and improve perceptions of self-worth.

Who Are We to Judge?

Toby Sheldon, a 33 year-old-man, may not feel comfortable with himself and who and what he feels he represents, physically. This is not as radical as some may think. One must reflect on the fashion trends of celebrities that people emulate to associate with that individual or group of individuals. Sheldon, for better or worse, has opted to take that fandom and emulating to a level other people would rather not. While some may deride Sheldon’s behavior as extreme or strange, it is important to recognize that this is his decision and that his acceptance with himself is really what matters.

What Works for You

Plastic surgery is not for everyone, and nobody should feel they have to receive treatments. However, plastic surgery should also remain available for everybody without a person feeling embarrassed or ashamed about receiving consultation and treatment. The choice is up to you. But it is your ultimately your body and it is the only one got.

If you or someone you know would like to learn more about plastic surgery or is considering a procedure, please contact our team of representatives. They will help you locate a board certified doctor in your areatoday!