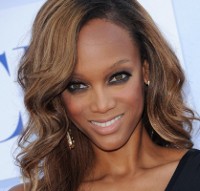 Bold, beautiful, and nearly six-feet tall, super-model Tyra Banks has spent the last two decades redefining America’s concept of beauty one fashion photo shoot at a time. While promoting the Singapore spin-off of her hit show America’s Top Model, Ms. Banks offered her views on enhancing natural looks through artificial means. Though Tyra is a big proponent of women discovering their inner beauty first, she thinks that plastic surgery is “absolutely fantastic” and shared a few tales of her own struggles with body image.

Following a media conference at Resorts World Sentosa, Tyra granted Yahoo!Singapore a few minutes of her time to discuss her ambitions for Asia’s Next Top Model and the modeling world in general. When the conversion turned to cosmetic enhancement Banks once again let her fiery opinions show through. "I hate when models say 'Oh, plastic surgery is just a wrong thing,'" she admitted. "What're you talking about? You won the genetic lottery. You look like this specimen that's making people everywhere feel insecure and you're going to ridicule someone for getting plastic surgery?...Sometimes it's not fair that certain people are born with certain things.”

Tyra’s defense of aesthetic procedures and disgust with the stigmas that come with them likely stem from her own past of weight and body issues. Along with enduring childhood teasing about the size of her forehead, Tyra explained to reporters that she had been on “both sides of the weight issue” due to growth disorder that left her incapable of gaining weight for years then blind-sided by a sudden ballooning of her breasts and hips which put her modeling career in jeopardy.

Because of her experiences Tyra is one of the fashion industry’s biggest supporters of naturally proportioned models, preferring the term “fiery real” in lieu of “plus-sized” while describing her more voluptuous counterparts. "It's just very unhealthy," Banks said of the pressure that the fashion industry puts on girls. "Because even the models, a lot of them are not naturally thin and are starving themselves to look like the body that they have in magazines."

Then came the question of whether Trya herself would ever consider an aesthetic treatment, to which the 38-year-old replied with an enthusiastic “Sure!” As to when or how she might go about such a treatment, Tyra was undecided but commented, "I'm very lucky. Black people and Asian people have similar [strong] skin… But if one day I have wrinkles and I don't like it, I don't know if I'll cut myself but maybe… a little Botox fillers?”

While it may be a few years yet until this radiant diva needs a round of wrinkle-taming injections, Tyra is pursuing other future aspirations full-force. Depending on the success of Asia’s Next Top Model, Banks hopes to start other franchises including one for larger models as well as an all-male program. "I haven't done a good enough job of convincing my boss, but I'm not giving up,” Banks said in reference to creating a masculine version of her hit modeling competition. “Hopefully a male version will be sooner than later!"

Though we’ll just have to wait to see what Tyra’s next big move is, cosmetic services like the ones she endorsed are available now. If you’re interested in any procedure ranging from rhinoplasty to Botox, contact us. Plastic Surgery Portal has one of the largest nationwide networks of premium cosmetic experts, and you can schedule a private consultation with any one of them by getting in touch with us today!