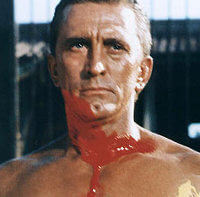 Being born with a cleft chin-- or "butt chin"-- is totally normal. People with dimples in their chin simply have an irregularity in their genes that causes a dip in their lower jawbone. While it’s pretty easy to have a butt chin surgically removed, many people are actually choosing the reverse: to have a dimple created in their chin by a plastic surgeon. The following list of celebrities famous for their butt chins may have you thinking about dimple creation surgery, too:

Ben Affleck. Ben Affleck’s butt chin is nearly as famous as his brief relationship with Jennifer Lopez. On Ben, a slight dimple adds to his handsome and chiseled face. The butt shape sits prominently at the bottom of his chin, and appears to have deepened with age. Butt chins can also disappear over time, as the face changes and new tissues grow.

Sandra Bullock. Sandra Bullock’s butt chin is the perfect compliment to her stunningly chiseled features (which she has reportedly enhanced with cheek implants). It’s just a slight dimple at the bottom of her chin that causes a subtle indent in her jaw and chin line.

Jason Lewis. In “Sex and the City,” Jason Lewis played cougar Samantha’s much younger boytoy. As a male model, Jason’s character had to be physically perfect. His butt chin gave his face a handsome, yet young look.

Vanessa Hudgens. Vanessa Hudgens got her start working with Disney, and her adorable girl next door looks have taken her far since then. Vanessa’s butt chin even matches the dimples in her cheeks.

John Travolta. No matter how old he gets, John Travolta will always have that “stud” factor, thanks in part to his broad jawline and handsome butt chin. Although his butt chin is natural, John is rumored to have had a dimple.

Blake Lively. It must be good to be Blake Lively, who has the measurements of a runway model and is a favorite of Vogue editor Anna Wintour. Blake’s butt chin obviously hasn’t held her back too much.

Michael Jackson. Michael Jackson is the only star on this list that wasn’t born with a natural cleft chin. Michael had his chin surgically augmented around the same time he had his skin lightened and a second rhinoplasty.

Hulk Hogan. The former wrestler’s butt chin has been deepened thanks to age and extensive tanning. Hulk Hogan’s mustache and goatee are strategically shaped around the cleft, emphasizing it.

Kirk Douglas. This Hollywood icon has the most famous butt chin of all. According to legend, costume designers on the set of his films even picked out certain ties to emphasize his butt chin. Son Michael Douglas inherited his father’s famous chin.