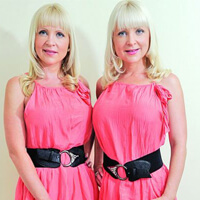 As kids identical twins are made to dress alike by proud parents who like to showcase and show off their children. Some twins never really grow out of that phase. Some twins have even opted to get identical plastic surgery.

English twins Jo and Kerry Burton have done everything in sync since birth, including cosmetic surgery. The nearly 40 year old set of twins have spent a combined excess of 100,000 dollars on plastic surgeries and treatment.

According to a report in The Daily Mail (online edition), The Burton have had two breast augmentations, identical nose jobs, eye-lifts, tattooed eyeliner, facials, spray tans, manicures and pedicures. Twice a year they even have Botox together – at the same time, naturally, so they age at the same rate.” The even opt have the procedures done by the same doctors.

Says Kerry Burton: “Mum did her very best to ensure she could quickly tell us apart. Jo was always dressed in blue and I was in pink. But even as children we wanted to do everything together.” Talk about double trouble.

Austrailian sisters Lucy and Anna DeCinque take that idea of sharing to whole new level. The almost 30 year old set of twins not only get identical wardrobes but matching plastic surgery. They are even share the same boyfriend.

For Lucy and Anna DeCinque, their similarities are a point of pride. They have spent in excess of 200,000 dollars on plastic and cosmetic surgery to look the same way. They want to share everything, including their joint Facebook account and boyfriend. “I don’t think we could get any closer,” claims Anna.

Breast implants, tattooed eyebrows, and lip fillers are among the cosmetic surgeries the DeCinque twins have gotten together. The share a single phone and even sleep in the same bed.

"We have the same taste in everything, so obviously we're going to like the same boy, too," Lucy admitted in a recent interview with The Sun. According to them, they received their first surgery four years ago when they had identical breast implant surgeries. They proudly admit they were inspired by Kim Kardashian.

"We had seen Kim's cleavage on TV and in the magazines and we liked it. We have always liked big boobs. We both wanted the surgery and we don't regret it," Anna said. With a reported 200,000 dollars spent on cosmetic procedures, one hopes there are no regrets.

"When we go out, we get so many guys saying they want to marry the both of us or date the both of us. For guys, in their dreams, they want two girlfriends," Lucy says. Heaven help the mister who comes between her and her sister.