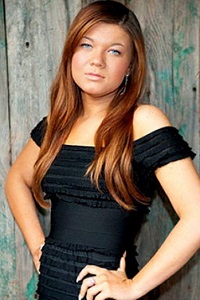 A little over a month ago, Amber Portwood of "Teen Mom OG" spoke cryptically about undergoing a mommy makeover. At the time, the implication was that she had followed in the footsteps of other young women from the "Teen Mom" franchise and gotten plastic surgery. Recently, Portwood has been posting a series of post-makeover selfies showing off her new look, but it's still unclear exactly what work she has had done.

From the moment Portwood first appeared on MTV's "16 and Pregnant" seven years ago, she hasn't been shy about sharing her journey with her fans. Over the years, that journey has included a number of on-camera arguments with her ex-fiancee Gary, a year-and-a-half long sting in prison, and her controversial relationship with her current boyfriend, Matt, who is 19 years her senior.

Another prominent part of Portwood's story over the years has been her struggle with weight loss. Although her weight has fluctuated over time, Portwood reportedly adopted a new diet and workout regimen recently, and just a few months ago she announced that she had lost a whopping 40 pounds. Still, life in the spotlight is difficult for anybody, and it's natural that Portwood might seek cosmetic enhancement beyond what a simple diet change could bring.

Even now, more than a month after her much-discussed makeover, nobody knows for sure what plastic surgery procedures Portwood had done. But some recent public appearances, combined with the aforementioned selfies, may provide some important clues.

According to eagle-eyed spectators, Portwood looks noticeably different in the tummy and chest areas, suggesting that she may have had a tummy tuck and breast implants. Also, in her recently posted selfies, Portwood's fans have noticed that her face doesn't look exactly the same as it used to, which means that she may have had either dermal fillers or Botox.

Until the "Teen Mom OG" star confirms otherwise, however, this is all idle speculation. And make no mistake, odds are that she will come clean at some point. Portwood has always been open and honest with her fans, particularly about her struggles with weight loss and self-image, so details about her mommy makeover should be coming eventually.

But now the question becomes: Which Teen Mom will go under the knife next? Since these young women spend their lives in front of the camera, it makes sense that they would want to look their best. And given that they all have disposable income, both from the show as well as other revenue streams, they certainly have the money to make any cosmetic changes they wish.

So it's not a matter of if another Teen Mom gets plastic surgery. It's simply a matter of when.