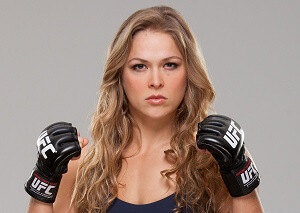 The sports world was rocked recently when Holly Holm upset an undefeated Ronda Rousey at UFC 193 in Melbourne, Australia. Coming into the fight, Rousey was heavily favored, having spent a combined total of just over a minute in the octagon to win her previous three matches. (Her fight with Cat Zingano in February, for example, lasted a staggering 14 seconds, so you could watch the entire match in only three Vines.) Rousey’s November 15th fight, on the hand, proved to be a bit more of a challenge, and she was knocked out by Holm about a minute into the second round, losing the UFC Bantamweight Title in the process.

By almost any measure, the blow that finally knocked out Rousey was devastating. In fact, some fight experts and medical professionals have likened the force of Holm’s kick to being struck by a hammer or having a car crash into you. Luckily, according to medical reports, Rousey was able to escape the fight without suffering a concussion. Unfortunately though, Rousey’s facial injuries were so severe that she couldn’t participate in the post-fight press conference, and she was seen leaving the venue with a pillow covering her face. Reportedly, Rousey will even have to undergo plastic surgery in order to repair her lip.

When most people think of plastic surgery, they probably think about the elective procedures that dominate the industry. To some degree this categorization is fair. Last year alone, cosmetic surgeons in the United States performed over 280,000 breast augmentations, more than 200,000 liposuction procedures and nearly 130,000 facelifts, the vast majority of which were entirely elective. But a significant portion of the work that plastic surgeons do is reconstructive, rather than purely cosmetic.

According to recent statistics, U.S. plastic surgeons repaired more than 250,000 lacerations and performed roughly 130,000 hand surgeries last year. Additionally, doctors took part in nearly 200,000 maxillofacial surgeries, which is the kind of surgery that Ronda Rousey will require on her lip. All combined, plastic surgeons perform more than 5 million procedures every year that are reconstructive.

So although elective procedures tend to get all the glory – as well as the notoriety – practical reconstructive procedures are a crucial part of cosmetic surgery. Without question, Ronda Rousey’s will be gracing magazine covers in no time, her face as good as new, all thanks to the work of a qualified plastic surgeon.