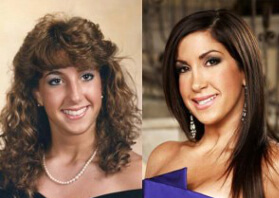 Looks as if the latest lift on “The Real Housewives of New Jersey” goes beyond the television viewer ratings. Real housewife and media celebrity Jacqueline Laurita has proclaimed in an interview on “Watch What Happens Live” that she has recently received a neck lift and a tummy tuck.

Momma’s Got a Brand-New Body

The 43 year old was extremely candid about the cosmetic surgery she has obtained under the care of Dr. Brent Moelleken, a prominent Beverly Hills plastic surgeon. According to a recent Twitter message, Laurita commented: “When workouts & diets fail 2 put your body back in order after 3 kids, is there anything wrong w/having a Dr Brent put u back together again?”

Dr. Moelleken and Laurita opted for a hybrid abdominoplasty (hybrid tummy tuck). Unlike a traditional tummy tuck that requires a hip-to-hip incision, a hybrid tummy tuck incision is relatively short and roughly the same as for a C-section.

Just what is abdominoplasty anyhow? When a woman has experienced childbirth, the muscles lining the abdomen, known as fascia, can tear and develop a bulge on that particular part of the body. The patient may often feel the cover, or layer, of fat on the lower abdomen. Cosmetic surgery such as liposuction can be applied to break up and eradicate excess fat but abdominoplasty is often essential for the tightening of the loose skin.

While there are numerous options available today, hybrid tummy tuck, the procedure Jacqueline Laurita opted for, combines both upper abdominal tightening, with a comparatively slight incision. In other words, hybrid tummy tucks provides the most alteration with the least amount of discomfort.

Adapting to Our Changing Bodies

Despite Laurita’s desire to improve upon her physical appearance, she says she still respects people who choose to have their body age without the assistance of plastic or cosmetic surgery. “I honestly think it’s beautiful when people grow old gracefully,” Laurita tweeted this February. “I have no idea y I choose not2. I’ll fight gravity w/Laser like Luke Skywalker.”

Tummy tucks are usually sought out by people who have loose or sagging skin tissues after pregnancy or major weight loss. If you are thinking about getting a neck lift or tummy tuck, be sure to consult your options with your doctor. Provided an individual is interested in receiving cosmetic or plastic surgery, the choice should be made for themselves (and their consulting doctor) and not on account of any external pressure.

Are Tummy Tucks Right for You?

If you are curious about neck lifts and abdominoplasty and would like to schedule a consultation in your area, contact one of our representatives. We can arrange an appointment with a local professional that can help you decide on treatments that would work best for you!