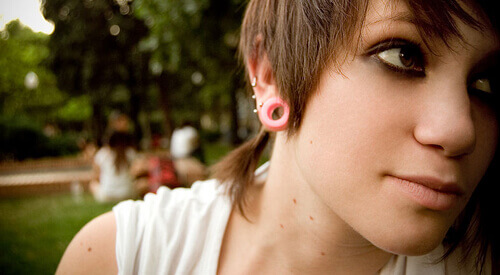 As one of the fastest growing cosmetic surgeries in the UK, flesh tunnel surgery is proving that what was once in, may be on its way out, according to Adrian Richards. The clinical director at Aurora Clinic sees 10 new patients a month, according to The Guardian report, saying there is “a lot of negativity around” when it comes to flesh tunnels.

From former punk band members turned teacher, to professional golfers, Richards said there are various reasons to reverse flesh tunnels. According to the clinical director, a soldier needed the reconstructive surgery since he was told by his commanding officer that anyone who had lobes larger than 2 centimeters could rightfully be discharged from the service.

A simple 30-minute procedure, Richard first removes the stretched area and then stitches the lobe back together, giving it a natural shape.

“The main discomfort is from the anesthetic, which lasts about 10 seconds. Once the stretched skin has been removed, we stitch the ear internally and use melt away stitches on the outside. Dressings come off after a week, and that’s it really,” Richards told The Guardian.

Though a one-time surgery can reconstruct the lobe to its original likeness, large piercings do not happen overnight. Starting off small, most thick holes are made slowly, with wider tunnels progressively placed in the ear every few weeks.

“Once the holes stretch past 1.5 centimeters in diameter, the earlobe will never spring back to its original shape,” according to the Guardian.

A 2011 BBC News Magazine report reveals how the body modification was all the rage only a few years ago. Though there was no apology for large lobes in the report, London body piercing salon Cold Steel’s owner Julie Howick did warn that there is a varying point of no return.

“A stretched piercing can shrink back to its original size but this depends on several factors, including the length of time taken to stretch and the elasticity of the skin. In some cases, if you stretch too fast or by too much, the lobe can split,” Howick said. “Most people don't go above 10mm. They are thinking about the future. Once you start going to 20 millimeters or 30 millimeters, you would need reconstruction if you changed your mind.”

Regardless of taste, some must have reconstruction surgery, whether they like it or not. This was the case for Luke Clark, a young man who after seven failed interviews found he was being judged for his piercings. According to the Guardian, “potential employers didn’t seem to like the 4 centimeter ‘flesh tunnel’ holes he had in each ear as much as he did, and the problem was that when he took the plugs out, his stretched earlobes looked terrible.”

Whether they are too wide simply for fashion sake, or for future employment, flesh tunnel reconstruction is a cosmetic procedure you should hear about. If you or someone you know would like more information about plastic surgery, please feel free to schedule a consultation or contact one of our representatives today!