This is How You Plastic Surgery: Calista Flockhart Shines at 50 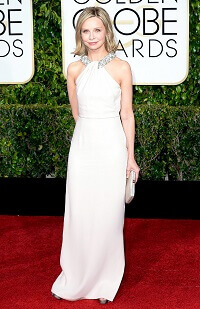 It’s no secret that Americans are fascinated by the plastic surgery habits of Hollywood’s leading ladies and gents. The latest in a long string of stars to spur surgery speculation, Calista Flockhart recently underwent a style makeover that has doctors and fans questioning whether the TV and movie beauty has gone under the knife.

Rising to fame with TV’s Ally McBeal, Emmy nominee Calista Flockhart has appeared in an array of small and silver-screen hits including Brothers & Sisters, the Birdcage and Web Therapy. Most recently, the actress, who is married to Harrison Ford, was cast in CBS’ upcoming Supergirl, in which she will play DC Comics’ media mogul Cat Grant. However, despite Ms. Flockhart’s many accomplishments in entertainment, it’s the star’s physical appearance that has tongues wagging of late.

Since she turned 50 in November of 2014, Flockhart has made few public appearances. However, her arrival at the Golden Globes had plastic surgeons and media members alike wondering if she underwent surgery.

According to multiple sources, Ms. Flockhart appeared to have undergone a number of physical alterations. Not only did the lovely star look even younger and more beautiful than usual, but various physicians have also suggested that her lips appeared fuller and her nasolabial folds lessened. Additionally, one surgeon commented that Flockhart’s cheekbones looked more prominent and her face firmer.

Further, doctors have speculated on what procedures Flockhart may have undergone, with Botox and limited lower facelift being the most likely options. Additionally, some cosmetic surgeons believe Ms. Flockhart may have had fillers to plump her lips. Despite the rampant speculation, Flockart’s reps were quick to deny any surgery rumors, insisting that the actress’ appearance is completely natural.

Whether or not Mr. Flockhart underwent cosmetic enhancement, there’s one point on which doctors and fans seem to be in agreement, and it’s that the actress looks as beautiful as ever. While some stars appear overly done-up or even fake after surgery, Ms. Flockhart has managed to retain her freshness and beauty. In fact, plastic surgeons expect many women to visit asking for similar procedures.

Considering a plastic surgery procedure? Whatever your reasons for going under the knife, it’s important to research the treatments and doctors thoroughly. The last thing you want to do is spend thousands of dollars on a procedure and wind up unhappy with the end result. Do your homework to ensure the happiest end result for all involved.