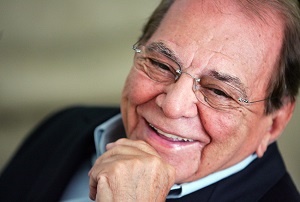 The father of the Brazilian butt lift and other now common plastic surgery procedures has died at 93. Brazilian Dr. Ivo Pitanguy passed away just one day after he carried the Olympic torch to Rio in his wheelchair, part of a relay for the lighting ceremony at the Games.

The rich and famous around the world came to his Brazilian practice to have work done, even though his clinic was located in a run-down section of Rio. Pitanguy was a major reason Brazil became a plastic surgery tourism destination. In fact, Brazil is now the world’s leader in cosmetic surgery, according to The Guardian. Pitanguy opened his own clinic for teaching plastic surgery specialties, with nearly 600 surgeons taking the three-year course. His work has influenced a generation of those involved in cosmetic surgery.

In 1961, spectators at a Brazilian circus were badly burned in a tent fire. Pitanguy helped these victims, and the event changed him. He realized how important physical appearance is in daily life, and how it affects self-esteem. Although he had many celebrated clients – and was remarkably discreet about their identities – he always volunteered services to poor people disfigured by accidents. Each week, he performed surgeries on indigent patients with cleft palates and other birth defects at a Rio public hospital.

Pitanguy estimated he performed at least 20,000 surgeries, both for profit and for charity.

One well-known patient was Austrian Formula One driver Nicki Lauda, who suffered severe facial burns in a racing accident. Pitanguy repaired Lauda’s face, although the driver lost his right ear in the disaster. Italian movie icons Sophia Loren and Gina Lollobrigida were also Pitanguy clients. Old Blue Eyes himself – Frank Sinatra- was rumored to have had work done by the master. As the New York Times put it, Pitanguy did not “nip and tell.”

Because Rio is synonymous with the beach, sea and bikinis, some of Pitanguy’s most innovative techniques centered on the exposed parts of the body. He perfected a tummy tuck methodology that left little scarring above the bikini line. The Brazilian butt lift transfers fat from areas of the body in which it isn’t wanted into the buttocks. Pitanguy also performed some of the first breast reductions.

Although he championed beauty as a “human right,” the trailblazing plastic surgeon never went under the knife himself.