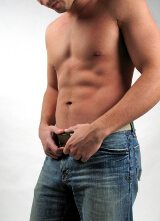 Despite what you may have heard, some degree of penile curvature is normal. It's even more normal for the penis to point to the right or the left when erect. But some men suffer from a penis that curves in a “J” or “U” shape, and that's when penile curvature can become a problem that's beyond cosmetic. A strong penile curvature can negatively affect a man's sex life and even prevent it from happening. Even if it is possible, some men find that their curved penises result in embarrassment and anxiety in front of their partners. Penile curvature surgery can help ward off these psychological effects and boost self confidence.

So what causes penile curvature? The answer is: a lot of things. As previously mentioned, some degree of curvature is very normal. Very noticeable curvature can be the result of a congenital condition called chordee, where the curvature is at the very tip, that's simply worse in some men than others. It might also be due to an acquired condition called Peyronie's disease. Peyronie's disease occurs when scar tissue replaces the normal elastic tissue in the penis. The scar tissue can be the result of inflammation, trauma, or improper healing after injury. When a normal penis becomes erect, the elastic tissue stretches evenly so that the erection is straight. Scar tissue is not very stretchy, so that's what causes the curve in one direction or another. In addition to the curvature, Peyronie's disease can also cause drastic penile shortening and painful erections. Men with Peyronie's disease usually have a penis that is at least 40 degrees curved.

Penile curvature, congenital or acquired, can be surgically corrected. Surgeons use what's called a modified Nesbit procedure to permanently straighten out the penis when it's flaccid and erect. After the patient is placed under general anesthesia, a mock erection is created so the surgeon see the exact curve of the penis. Then, the unaffected side of the penis with no scar tissue is shortened to match that of the side that does have scar tissue. This is the most common way to correct penile curvature, but some men that have the procedure are disappointed that their penis is shortened by one to three centimeters, depending on the severity of the pre-existing curvature. Thus, it's most often performed on men with adequate penis length and less severe curvature. Some men have the Nesbit procedure performed and then go on to have penile enlargement surgery. The other option for penile curvature correction is to have the penis lengthened. During this procedure, a skin graft from the patient or cadaver is sutured onto the area with scar tissue, resulting in a straight erection and a longer penis.

Risks and Side Effects

Surprisingly, recovering from penile surgery isn't too bad. The pain has been described as mild, with severe pain more common with the penis lengthening procedure. The dressing that the surgeon applies to the penis should be left on for about 72 hours after surgery. A full recovery is expected in four to six weeks, with most surgeons agreeing that you can resume sexual intercourse in six weeks.