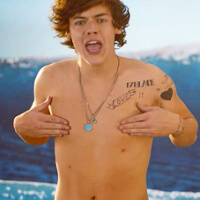 ‘One Direction’ might be the most popular boy band on the pop landscape, but there's hardly anything mono about one member's nipple situation. Yes, the rumors are true: Harry from ‘One Direction’ has four nipples.

How could this have happened? What stroke of offbeat evolution in Harry's gene pool allowed for this remarkable development? And despite his extra set, how did his voice become so heavenly? Okay, extra nipples have nothing to do with the beauty of your voice, but these are serious nipple questions that need to be addressed. Don't worry; Plastic Surgery Portal is here with answers.

WHERE DO EXTRA NIPPLES COME FROM?

Considered one of the more popular fresh faced belters from ‘One Direction,’ Harry Styles knows that his nipples get a peculiar amount of attention. This chart blazing 18 year-old even has a little theory on why he was blessed with an extra set of chickpeas: "I've got 4 nipples. I think I must have been a twin, but then the other one went away and left its nipples behind." Yes, while that hypothesis sounds absolutely wild, he might not be that far off.

Harry is referring to the ‘vanishing twin syndrome’- a phenomenon that occurs when one ailing twin fetus is absorbed into the other in the first trimester of a mother’s pregnancy. The event can occur so soon that the mother often does not know she was even carrying twins. This rare happening is an interesting theory for extra nipples young Harry, but it is highly unlikely. There is, in fact, a much more common nipple growing event that takes place in the womb.

ALL ABOARD THE MILK LINE!

Extra nipples, referred to as supernumerary nipples, form during fetal development along ‘milk lines.’ These milk lines are unique areas that feature slightly thicker and stronger tissue where it is safe for breast tissue to develop. The lines typically form a large v-shape beginning in your inner arm, down through your arm pits, breasts, abdomen, genital areas, and, in some cases, down along the inner thighs to your feet. It is possible for supernumerary nipples to appear anywhere on these milk lines from the head all the way to the feet. Maybe Harry's hiding a few more nipples on his inner thighs or behind the knees? We can't possibly be sure. These randomly occurring milk line nipples can range from little tufts of hair to a full fledged nipple (areola and all). They are often mistaken for moles and referred to as ‘triples’ and ‘quaples’ in some supernumerary street gangs.

As expected, extra nipples form during fetal development. Men and women can develop extra nipples, and they are overwhelmingly benign. It is possible, however, to develop breast cancer in extra nipples. If needed, you can remove them surgically with little to no complication.

Despite this oddity, Harry admits that he has absolutely no problems disrobing in public. In fact, he loves it and wouldn't mind showing off his four star nipples a little more often. "Stripping off is very liberating," the young star admitted after a recent tour. He isn’t bashful about his extra ‘features’- admitting that wielding two sets of nips might bring down the spirits of most people. For him, on the other hand, he hardly cares. You can't perform for millions and secretly hate your nipples at the same time, right?

1 in 18 humans experience extra nippling. This could be your dad, your teacher, your boss, the mailman, Harry Styles, or even the Pope- you simply never know who could be packing extra nipples. If you or someone you know is interested in treating or removing supernumerary nipples with a quick surgical procedure, please contact Plastic Surgery Portal or search for a doctor in your area today!