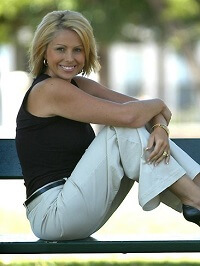 The risks were worth it, according to actress Melissa Bell.

In an exclusive interview with Woman’s Day, the former Neighbours star and singer shared how she began having plastic surgery at the age of 24. Now 18 years and six major procedures later, Bell believes her body dysmorphia is why she has gone under the knife half a dozen times. Her first husband left her immediately after having her son by caesarean.

“I guess that is what triggered my first operation,” she said. WebMD reports that body dysmorphia is a “distinct mental disorder” that causes the patient to see themselves as less than perfect, and even “ugly” according to the popular medical website, adding patients “avoid social exposure to others or turn to plastic surgery to try and improve their appearance.”

Calling the experience of being left alone by her husband traumatic, Bell began to look to surgery as a sense of relief and sought more after.

“Once you start the cycle of getting work done, you just think, ‘Oh, this is pretty normal,’” Bell explained to Woman’s Day.

Since her first surgery in her twenties, Bell has two more liposuction treatments and three breast augmentations. She has also had a gastric balloon inserted in her stomach and has had both Botox and hormone injections. The total cost, $115,000. A number she does not regret but is not looking to increase.

Between the $35,000 on breast augmentations to fill her voluptuous E cup,; $40,000 on liposuction to maintain slim legs, $8,000 on hormone injections to lose weight,; $30,000 on a stomach balloon to suppress appetite, and $2,000 on Botox to rid her face of fine lines, Bell has made quite an investment in her figure, according to a Daily Mail report.

But it is not the money that keeps her from further surgeries, it’s risk. With children, it is not all about her anymore. “I’ve got four beautiful children to look after, so I can’t keep putting myself at risk,” said Bell. Now it’s about self-acceptance when Bell sees her reflection in a mirror. She told Woman’s Day she “has finally learned to work with what I’ve got and be comfortable with who I am.”

Battling body dysmorphia and possible plastic surgeries has been a subject among the stars, with Bruce Willis and Demi Moore’s daughters, Tallulah and Rumer, respectively publicly speaking about the disorder and denying plastic surgery gossip. A recent Plastic Surgery Portal report on Rumer Willis has the 26-year-old boldly denying surgery but saying if she ever chooses to opt for a procedure, she will not lie to herself and others.

And as for her sister suffering body dysmorphia like Bell, Rumer Willis applauds her sister Tallulah’s bravery and openness to share the truth. With Bell doing the same, an important conversation has started—celebrities are no different than their fans when it comes to self acceptance, and they too must like what they see in their reflection.

“I am finally happy,” said Bell.